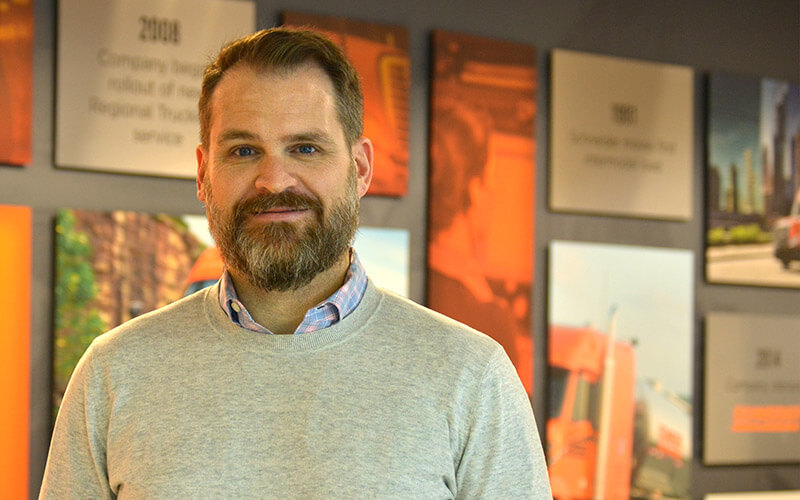 Jeff Hujet has always craved adventure. From moving to Hawaii on a whim after graduating from college to riding a bicycle across Central America, Jeff has never settled for boring.

So when the opportunity arose to apply for a Team truck driving job with his at-the-time-girlfriend-now-wife Maggie, he ran with it.

“We had just taken a two-week road trip where we threw a mattress in the back of my parents’ mini-van, and we had books on tape and food and we slept in the van,” Maggie said. “We had a lot of fun and got along really well.”

At the time, both of Maggie’s parents were working for Schneider. Jeff’s mom previously worked for the company and his brother was once a truck driver.

“We didn’t even consider other companies to drive for,” Maggie said. “We knew we would drive for Schneider.”

Jeff and Maggie started at Schneider’s training academy in 2003. The two still reminisce on their memories of truck driving school and the highlights of being new drivers.

“I still remember the first time I watched Maggie drive a semi-truck,” Jeff said. “I was so proud of her.”

Jeff and Maggie were over-the-road drivers for Schneider for about two years. The couple said they were happiest when they were assigned to cross-country loads. They also loved seeing the West, especially Colorado and Montana.

“Maggie’s dad created this book for us with all of our trips,” Jeff said. “He would print out every load we were assigned to and put it in this binder. We still have the binder with every single place we ever went.”

Maggie said becoming truck drivers was a great decision, as their income helped them to pay off student loan debt and allowed them to buy a new car and put a down payment on a house. The experience also led to memories they are never going to forget.

“Seeing the country was a pretty big privilege,” Maggie said. “Truck driving was definitely the highlight of our twenties.”

After getting off the road, the duo both went back to college – Jeff for accounting and finance at the University of Green Bay, while Maggie to become a physician’s assistant. They also got married in 2008.

While Jeff was in school at UWGB, he was offered a Schneider internship from Maggie’s father, George Mieners, at SFI Trucks and Financing.

Jeff said his internship allowed him a general exposure to the truck leasing business and gave him the opportunity to attend recruiting events, do prospect work and try out different projects.

Jeff interned for one year with SFI before accepting a full-time position as an Account Administrator (AA), a role where he worked with owner-operators who leased semi-trucks from SFI.

“Drawing on my experience as a truck driver was huge in my role as an AA,” Jeff said. “Being able to relate to the trucking lifestyle and say, ‘I’ve been there before’ and being empathetic with the driver helped with my success in that role.”

Since 2015, Jeff has been a Lease Administration manager with SFI, where he, “leads a team of associates in the back office.”

From a truck driver to an intern to a full-time associate, Jeff said he looks forward to continuing to grow in his career at Schneider and is thankful for the opportunities he’s been provided.

“Schneider is a family-focused company,” Jeff said. “Our core values are just as strong today as they’ve ever been. This company is a foundation of the Green Bay community and has given its associates opportunities to earn a living and support a family. We have a lot to be thankful for here.”

Imagine yourself at Schneider.

Did you know the person who oversees truck drivers' pay at Schneider was once a truck driver...

Stephen Bruffett came out of retirement one year ago to a role he couldn't pass up: Schneider's...

Schneider has a new operations manager in Portland. See his impressive career story and write the...
Job Alerts