Women might make up a small fraction of the trucking industry, but that doesn’t mean they’re not making a big difference within it.

When Schneider had the opportunity to nominate an associate for Women in Trucking’s (WIT) Influential Women in Trucking Award, there were many women who came to mind! Ultimately, the company chose Kris Maczollek, division manager for all of Schneider’s expedited operations, who has been an influential force both internally at Schneider and within the trucking industry. 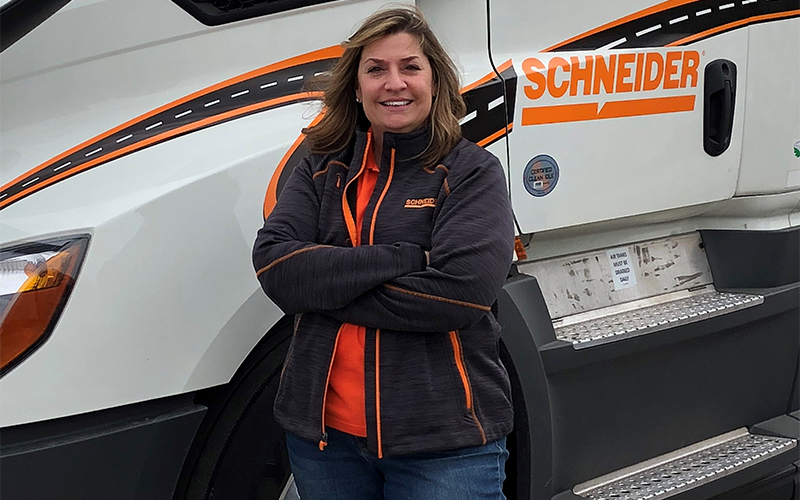 Since joining Schneider’s ranks 23 years ago, Kris has worked her way up through a variety of operations and safety roles. With more than two decades of experience, Kris knows the Schneider business inside and out, and she articulates her knowledge with full command. She’s willing to go the extra mile and devotes the necessary time to do things the right way. In fact, Kris led her division to be named the 2015 Division of the Year at Schneider.

Kris’ colleagues describe her as confident, dedicated and empathetic.

The daughter of a truck driver, Kris understands what life on the road is like, and she uses that insight to inform her work with drivers.

She realizes the choices that drivers have to make and how the work they do affects them and their families.

Kris’ influence extends beyond the walls of Schneider. She is an active member of the Indiana Motor Truck Association (IMTA) board of directors, and she has collaborated with WIT to organize the “Trucks ARE for Girls” event at Schneider’s Indianapolis facility in 2016.

The event brought in local Girl Scouts for a day of learning about the importance of truck drivers in today’s economy and their role in delivering goods. The scouts got a firsthand look at what goes into a truck’s maintenance and even had the chance to drive a truck simulator. The event is an example of Kris’ passion for promoting the role of women in the trucking industry.

Kris makes a concentrated effort to inspire young women at Schneider. After all, when she accepted a job at Schneider after graduating college, Kris was one of them. Now Kris works to ensure that these young leaders are viewed as equals within the company and that they can have a successful, rewarding career in transportation.

Through her hard work at Schneider and the trucking industry, Kris has stood out not only as an influential woman in trucking, but as an inspiring woman as well.

Be part of the women in trucking revolution.

Did you know over 1,000 women have been truck drivers for Schneider? You could be next. Learn more about women in trucking.

Have you been inspired by a woman in the trucking industry? Tell us about her in the comments below.

Schneider is a proud member of the Women In Trucking Association, and we're proud that a Schneider...

Schneider is a proud member of the Women In Trucking Association. WIT CEO Ellen Voie explains...