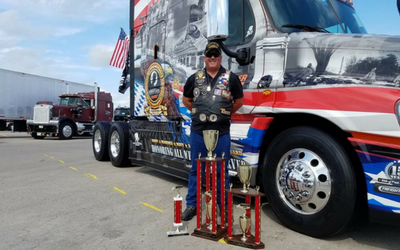 “The American,” Schneider’s 2017 Ride of Pride military tribute truck, kept the tradition going, racking up even more hardware at the Iowa 80 truck show July 13-15. The annual Walcott Truckers Jamboree is held at the Iowa 80 Truckstop — the largest truck stop in the world.

“The Walcott experience was an eye opener. I had never been,” Price said. “The American and I being so visible in position one were centrally located. Not only did we meet hundreds of visitors, but the families and trucker brothers I made there are priceless to me.

“Winning first place in graphics, second in company bobtail up next to these 70+ other entries was a humbling experience. I am honored to be in the company of such fine men and women.”

More from the Iowa 80 truck show:

We’re proud to hire those who serve.

Let us show you why Schneider has been independently ranked as a top military friendly employer in the industry.

Schneider had the honor of having three company drivers and one owner-operator involved in the 2017...

The 2017 Ride of Pride driver has been selected and he brings an inspiring military background with...

Associates at Schneider's headquarters don't need to leave the building to get a great breakfast or...
Job Alerts