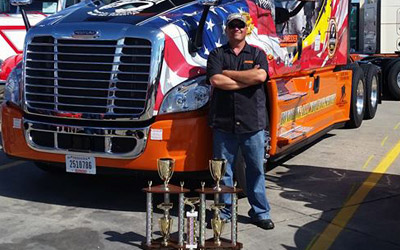 The 2016 Ride of Pride truck, which I’ve nicknamed “Valor,” made a big impression at the annual Walcott Truckers Jamboree in July. This popular festival is held each year at the Iowa 80 Truckstop, the largest truck stop in the world. Over 40,000 people attend the event, which celebrates America’s truckers and their big rigs.

We brought home two second-place trophies from the Jamboree’s Super Truck Beauty Contest – building on last year’s success with the 2015 Ride of Pride truck. The truck was awarded in two categories: 2016–2013 Bobtail Conventional, and Custom Graphics – Bobtail. I was proud of the recognition because the truck honors something so important to both Schneider and me: the U.S. military and those who have served in it.

The truck’s graphics depict all U.S. conflicts from World War II on, including a beach invasion on D-Day, a helicopter landing in Vietnam and a patrol in Afghanistan. The truck is also decorated with an American flag and bald eagle. The truck’s hood pays tribute to prisoners of war and those missing in action.

Valor was one of 36 trucks to take home a prize in the contest. Other events at the Jamboree include an antique truck display, an Iowa pork chop cookout and the “Trucker Olympics,” where truckers competed in tire flipping and rolling, a steering wheel ring toss and strong pull events.

If you aren’t familiar with the Ride of Pride, I’ll share a little background. Schneider was chosen by Freightliner to receive the special truck as a way to honor veterans. In fact, 2016’s Ride of Pride truck marks the 10th time that Schneider was honored with a military-themed truck. As an Army veteran who served in Iraq, I was chosen to spend the year bringing Valor to military events and truck shows like the Walcott Truckers Jamboree.

Valor and I will be visiting many other places throughout my tenure as the Ride of Pride driver, but I am sure that this award-winning experience will stand out as one of the highlights of our year together!

Thank you to those who serve.

Schneider values service members by offering extended benefits and differential pay. See what else we have to offer.

Learn About Our Military Program

Have you attended a truck show like the Walcott Truckers Jamboree? If so, what was your favorite part?

Jon Ritscher of Crown City, Ohio, has been with Schneider since 2013 and is currently the driver of the 2016 Ride of Pride military tribute truck. He served in the U.S. Army for eight years as part of a support unit that provided fuel to aircraft. His service included two tours in Iraq. In his free time, Jon enjoys spending time with his wife and young son.

Be prepared if a tornado touches down this summer by learning these tornado driving safety tips for...

Truck drivers are essential workers. Be inspired by these stories of heroes at work, and see how...
Job Alerts