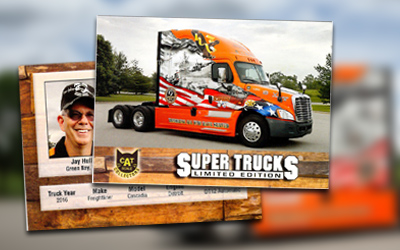 Truck drivers weighing their trucks at CAT Scale may see a familiar orange on one of the collector cards with their weigh ticket.

The 2015 Ride of Pride military tribute truck, a Freightliner Cascadia featuring imagery of each military branch, is the first Schneider truck to be featured in the series, which is collected by truck drivers nationwide at CAT Scale’s more than 1,500 locations.

Find out why we’re a top military-friendly team.

Learn more about how we show our appreciation to veterans by converting military experience to Schneider pay, offering competitive benefits and providing a flexible work schedule.

Do you collect CAT Scale Super Trucks® collector cards? Have you collected the 2015 Ride of Pride truck card yet?

Schneider has opened a new Dallas facility, and it's hosting a grand opening celebration and driver...

If you're over 50 years old, your experience is valuable in the workplace, and at Schneider, we...
Job Alerts