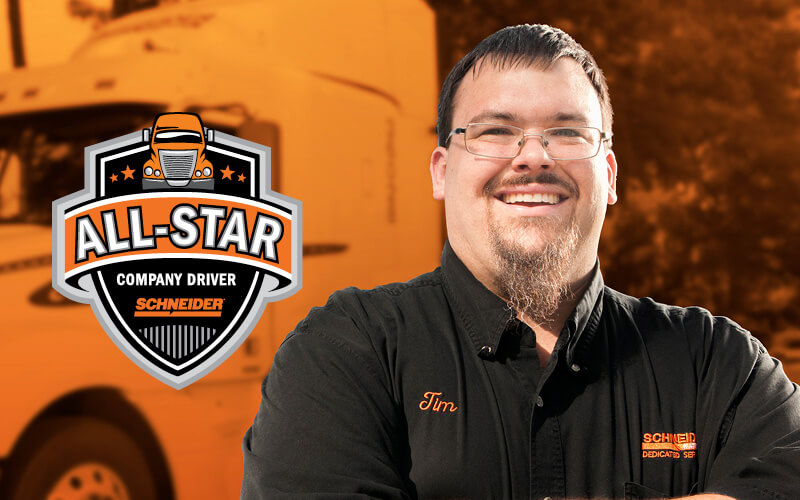 After 14 years of working for Schneider, Dedicated All-Star driver Timothy Marino still appreciates the flexibility and compassion the company continues to offer him.

When Tim lost his finger and had to take a break from driving his big rig, Schneider offered him a job in the office as a fleet specialist. Tim stayed in this role for nine months before heading back out on the road.

“No matter what, Schneider takes care of you,” Tim said. “They have so many different career paths for drivers. I really feel like I’ve been valued, both in the office and as a driver.

Giving back to others and Schneider

In return, Tim also takes care of Schneider. He consistently goes out of his way to help others, whether it’s giving drivers rides home, assisting those who are low on hours or moving loaded trailers to Schneider’s drop-lot. He even helped his DBL, Dan Heidbrider, when a hurricane hit Georgia.

“A hurricane came through Albany when my family and I were new to the area and had no friends or family nearby,” Dan said. “After the storm passed and cell service was restored, my phone rang, and it was Tim. He told me to pack the car and head to his home to eat, shower or stay the night if needed. He even offered to store our perishables in his freezer until our power came back on – and Albany was out of power for almost a week.”

Because of his kindness and willingness to help others, Tim received a Schneider Orange Heart presidential award in 2018. 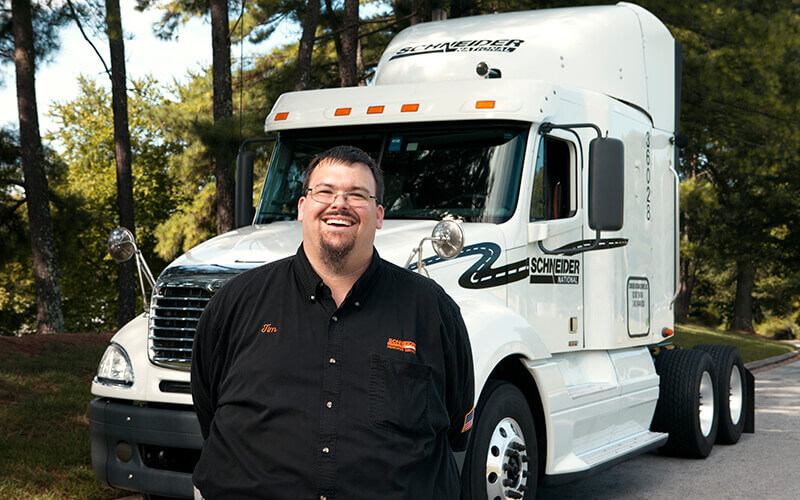 After working a few different jobs as a young adult, Tim began applying to every trucking company he could get an application for. He grew discouraged when each company turned him down because he was only 21 years old.

“They said people my age had wrecks, were irresponsible and quit,” Tim said. “When I put in my application for Schneider, I didn’t think I would get a call back. But 20 minutes later, a recruiter called me to set me up with a training academy.”

Tim’s early doubters only motivated him to try harder.

“It drove me to prove them wrong!” Tim said.

Thriving in his career

Tim has indeed proven the people who doubted him wrong. In almost a decade and a half, he’s driven over 1.2 million miles (while taking nearly a year off with his injury), first as an Over-the-Road driver and now as a Dedicated driver for MillerCoors out of Albany, Ga.

He gives credit to the orientation program Schneider requires all drivers to attend. He said the help he received when he was new to the company was second-to-none.

“The Schneider trainers are willing to bend over backwards to help you with whatever you need to learn, even something as simple as adjusting mirrors or as complex as new technology,” Tim said.

Beyond that, he’s appreciative of the support teams.

“Every driver business leader, trip planner and customer service rep I’ve ever met is great,” Tim said. “When I go to Green Bay and see how many people work together to keep us moving, I can’t help but be amazed.”

Tim loves that he’s able to act as his own boss by trip planning and prioritizing his day, but he doesn’t forget the main task at hand.

“As a driver, I make 10,000 decisions per mile!” Tim said. “There’s satisfaction in reaching my destination with everything in one piece. It’s an obstacle course hundreds of miles long, and I love saying that I made my way through it—safely.”

As for the future, Tim loves being a driver, but he’s keeping his options open.

“Maybe one day I’ll look to get into the office side of things more, provided the right opportunity comes along,” Tim said. “But what I would really love to do is reach 5 million safe miles.”

What is dedicated trucking?