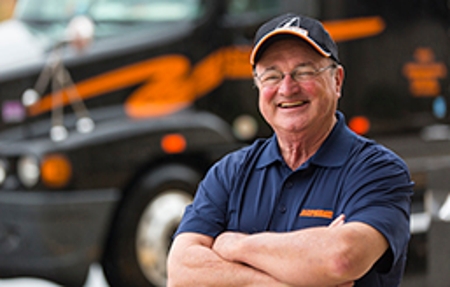 GREEN BAY, Wisconsin - June 30, 2016 - When you think of a hero, you probably imagine a firefighter, soldier or athlete. The most unassuming hero of them all, however, is the one who has dedicated his career to the open road, keeping America moving safely one load at a time. That hero is Schneider professional truck driver Bob Wyatt, recently given the International Driver Excellence Award from the Commercial Vehicle Safety Alliance (CVSA) for his exceptional career and his commitment to public safety.

Now in its second year, this annual award program recognizes individuals who go above and beyond the performance of their duties as commercial vehicle drivers. These drivers distinguish themselves conspicuously and beyond the call of duty through safe operation and compliance, achieved with evident distinction for an extended period of time.

"We, at CVSA, cannot be more proud to announce Bob Wyatt as this year's winner of the International Driver Excellence Award," said CVSA President Maj. Jay Thompson with the Arkansas Highway Police. "We are so impressed by his spotless record of 51 years of safe driving, his unwavering, long-term commitment to public safety, his proactive approach to growth and learning, and his willingness to engage with leadership to be a catalyst for industry improvement. We are truly honored to select Bob Wyatt to receive the 2016 International Driver Excellence Award."

Although he would never call himself a hero, Wyatt certainly is a Schneider All-Star, a willing, yet humble, ambassador for the company and the transportation industry. He willingly shares wisdom from his 51 years of truck driving experience and tips to help new drivers be safe and successful. Though he would not brag about it, Wyatt is the most decorated and longest tenured driver in Schneider history, with 13 awards in his 43 years with the company. He is the only driver to have received both the 4 Million Miles Safe Award and 40-year Consecutive Safe Years Driving Award, and was an inaugural inductee into Schneider’s Haul of Fame. Wyatt is expected to hit the 5 million mark this year – a feat accomplished by only one other driver in Schneider’s 80+-year history.

"No one can tell anyone else how to drive safely for millions of miles, or even to town and back," says Wyatt. "You do it one mile marker at a time, keeping your mind clear and your cell phone turned off and out of reach. If you just drive in a straight line, you’ll get hit 10 times before noon!"

Schneider President and CEO Chris Lofgren is one of Wyatt's biggest fans. "Bob Wyatt is a tremendous asset to both Schneider and to the entire truck driving profession," said Lofgren. “He makes the entire industry better – and safer – simply by being the driver and person that he is. What stands out to me is his commitment, interest in people and a terrific sense of humor."

Though Wyatt got a taste for the open road while tagging along on runs with his dad, he got his professional start in 1965 driving a race van for Carroll Shelby, an American racing and automotive legend. He traded in speed for the open road after meeting his wife, Linda, and found a job with Schneider that offered security and stability. These days, Wyatt prefers to enjoy the simple things in life when he’s not on the road, like spending time with family, participating in his local church and walking the dog around his hometown of Springfield, Ill.

Wyatt, accompanied by his wife, will receive his award (which includes a trophy and monetary gift) at the CVSA 2016 Annual Conference and Exhibition in Little Rock, Arkansas, this September.

One of the largest truckload carriers in North America, Schneider has been the top choice of safety-minded drivers for 80 years. With over 75 percent of its drivers getting home weekly or better, Schneider provides professional opportunities that meet work-life balance needs of today’s drivers and owner-operators.

Schneider is a $4 billion company and ranked a top-paying carrier by the National Transportation Institute, while being nationally recognized for its support of current and former military personnel. For more information about Schneider career opportunities, visit www.schneiderjobs.com. You can also connect with Schneider on Facebook at www.facebook.com/jobsatschneider or follow on Twitter @schneiderjobs.