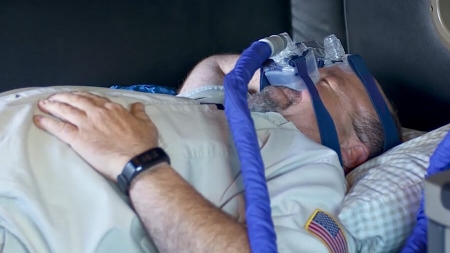 GREEN BAY, Wisconsin - April 16, 2019 - When it comes to making safety a top priority, Schneider (NYSE: SNDR), a premier provider of trucking, intermodal and logistics services, leaves no possibility unexplored. As a collaborator on groundbreaking research about obstructive sleep apnea (OSA), it has been recognized with the University of Minnesota Center for Transportation Studies’ Robert C. Johns Research Partnership Award.

The Robert C. Johns Research Partnership Award is presented each year to a team of individuals who collaboratively use their expertise to achieve significant impacts on transportation practice and policy. This honor recognizes a team that represents one or more sectors of society, including the public, academic, private and non-profit communities.

The project, titled “Exploring Links Between Medical Conditions and Safety Performance in Tractor Trailer Drivers,” was led by Dr. Stephen Burks and his research team at the University of Minnesota Morris. The study set out to determine how drivers are adversely affected by OSA, a common sleep disorder causing obstruction in the upper airway and frequently leading to decreased restorative sleep and persistent drowsiness. Schneider drivers with OSA participated in the study, matched with an equal number of control drivers with comparable job experience and tenure. Drivers received auto-adjusting positive airway pressure (APAP) treatment both at home and in the truck sleeper berth while on the road.

The results of the study revealed that drivers are five times less likely to have a crash by adhering to Schneider’s sleep apnea treatment program, compared with matched controls. These findings are pivotal in the continued pursuit of safety on North American roads.

"This project perfectly captures the spirit of the new Robert C. Johns Research Partnership Award in the way it has involved students and researchers from multiple disciplines, and the way it has engaged industry and those affected by this work," said University of Minnesota Center for Transportation Studies Director Laurie McGinnis. "Not only did the research team establish a close working relationship with the private sector, it was able to produce quantifiable results and implement its findings nationally to address the risks from drivers with obstructive sleep apnea."

Schneider established itself as a pioneer in sleep apnea research in 2006, becoming the first large-scale employer in the United States with a program to screen, diagnose and monitor OSA treatment adherence. Since drivers are more likely than the general population to have OSA, Schneider set out to create a program that would effectively and efficiently identify at-risk drivers and provide them the treatment necessary to improve their health and safety. The program was developed with input from sleep experts and was the first of its kind in the transportation industry.

A continued dedication to improving conditions for drivers with OSA has made Schneider the industry’s leader in sleep apnea research and treatment. While current federal regulations do not require carriers to screen or treat drivers for sleep apnea, Schneider screens all new driver employees for the condition. Additionally, Schneider provides healthcare savings for drivers in the program by offering full coverage of treatment expenses.

“This research exemplifies Schneider’s number one core value of Safety First and Always,” said Tom DiSalvi, Schneider’s vice president of safety and loss prevention. “Not only does this program make our roads safer, it also provides our drivers with the specialized treatment they need to improve their health and overall quality of life.”

For their collaboration in this research, Schneider is also a semifinalist for the 2019 National Safety Council (NSC) Green Cross Award. The honor recognizes organizations that show an unrelenting pursuit of exceptional, transferable safety through programs and innovations that advance NSC’s mission.

For more information about Schneider’s commitment to safety, visit Schneider.com or SchneiderJobs.com.

One of the largest trucking carriers in North America, Schneider has been a top choice of safety-minded drivers for over 80 years. With over 75 percent of its drivers getting home weekly or more frequently, Schneider provides professional opportunities that meet the work-life balance needs of today’s workforce.

Schneider has been listed by Forbes as one of America’s best employers and is ranked a top-paying carrier by the National Transportation Institute. Along with accolades from customers for its drivers’ service and performance, Schneider has been nationally recognized for its support of current and former military personnel among its ranks.