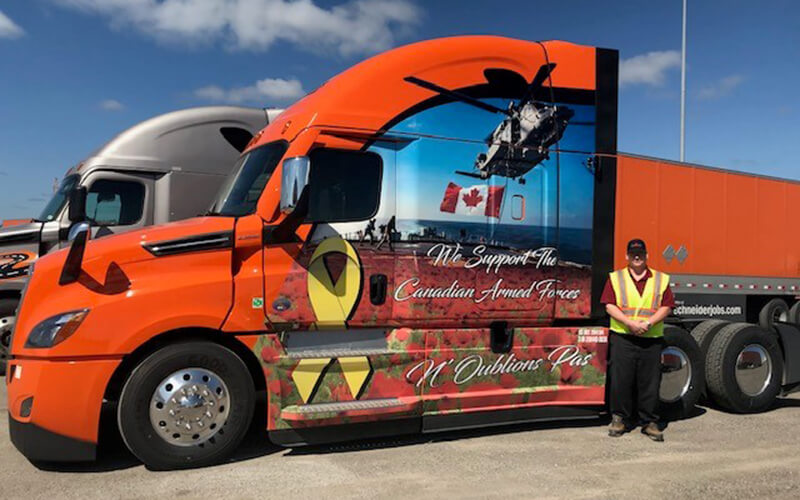 There is a new Ride of Pride (ROP) truck taking to the highways in Canada, but the driver is a familiar face: Michael Cunningham.

Michael is a Van Truckload driver based out of the Guelph, Ontario operating center and has been with Schneider since 2011. Michael was selected as a ROP driver in 2017 and has been doing an excellent job representing the program and Schneider ever since.

So, when it was announced that Freightliner had chosen Schneider to receive another Canadian ROP truck, Michael’s soon-to-be ten-year safe driving milestone and stellar military service record made him an easy choice as the driver.

A little background on Michael

When he was in high school, Michael joined the Canadian Army part-time (two nights per week) and then transitioned to full-time upon graduation. After five years in the Infantry, Michael switched branches to the Royal Canadian Navy.

“I was tired of sleeping in the dirt, and I wanted to learn a trade that would transfer to civilian life,” Michael said.

Michael served four-and-half years as Ordinary Seaman on the HMCS Yukon, which was stationed in Esquimalt, British Columbia, near Victoria. While there he received training to become an electronics technician and worked on sonar equipment.

Michael, who is an astronomy buff and enjoys peering through his telescope during home time, found the view from the ship quite memorable.

“When you are in the middle of the ocean at night, there is no other light and the sky is so different,” Michael said. “That’s when I realized that the Milky Way isn’t just white, it is really colorful – all the colors of the rainbow.”

After nine-and-half years of service, Michael worked in a factory until he made the decision to go to CDL school. While there he did some research on which company had the best safety culture, and Schneider was the obvious choice.

“I was just going to try it,” Michael said. “But I’ve been really happy, so I’ve stayed!”

About the new ROP truck 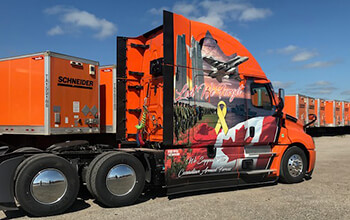 The new truck has some beautiful decals – and Michael was even able to provide input to the design team about them. Both sides feature a field of poppies to symbolize fallen soldiers, the Canadian flag, the yellow ribbon of remembrance and the motto “Lest We Forget” in both English and French.

The driver side also features a Cyclone helicopter refueling off the deck of the HMCS Halifax.

The passenger side highlights the HMCS Halifax, as well as an Airforce CF-18 (which is similar to a U.S. Hornet). There is also a photo of service members at the Canadian National Vimy Memorial in France, which is dedicated to Canadian troops killed during World War I.

The truck was a little delayed getting out of the gate because Michael found that one of the photographs had been electronically reversed, which made the soldiers at the memorial appear to be holding their guns in the wrong hand.

“We want to honor our veterans with this truck – and it should be perfect,” Michael said. “I didn’t want someone to notice that and think we weren’t taking their contributions seriously. Everyone agreed, and the truck went back and a new decal was applied!”

The truck will certainly have the opportunity to get noticed! Michael crosses the border between Canada and the U.S. twice each week, typically hauling freight to and from destinations in Illinois, Indiana, Pennsylvania or New Jersey. Michael will also bring the truck to select events – most often fundraising events for veterans’ organizations.

Two Ride of Pride trucks in one year

Schneider's 2020 U.S. Ride of Pride driver
About the author 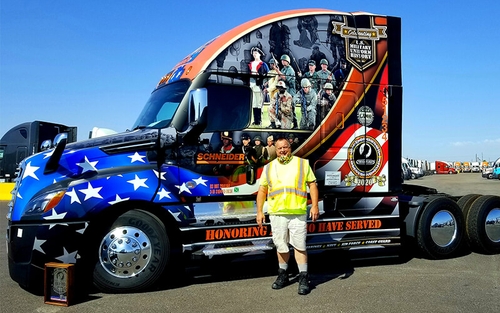