Don Schneider's Library: The Blueprint for a Company 'Built to Last' 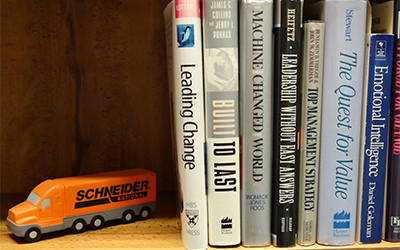 The following excerpt from Schneider’s company history book, “Leap of Faith:” The Story of Schneider, offers unique insight into the foundation of Schneider’s durability. Former CEO Don Schneider, who led Schneider from 1976 to 2002, had a short list of business books that anchored his library, including one he referred to as the “Schneider Bible”:

Don Schneider’s office at Schneider’s headquarters was a remarkable place for its lack of chairs. A man of boundless energy, Don worked standing up. He felt that by staying on his feet, he got more done.

Meetings were shorter and more pointed, as well. No one who was obliged to discuss something with him wasted much time when there was no opportunity to lean back and relax.

Relaxing was something Don didn’t do very well. Even when he was home at night, he was never far removed from his work. The television, his sons recall, was often tuned to national weather so that he could track meteorological phenomena that might impact the business. Beside his armchair was a stack of business periodicals, industry journals, reports, newspapers. Many mornings, when he returned to the office, he would take with him pages torn from those publications that he was anxious to share with members of his staff.

Perhaps nothing was more revealing about Don’s intellectual interests, however, than the short shelf of business books published during the 1980s and 1990s to which he referred again and again as he strove to shape Schneider for the “long haul.” They included such classic volumes as John P. Kotter’s A Force for Change, Ronald A. Heifetz’ Leadership Without Easy Answers, and Benjamin B. Tregoe and John W. Zimmerman’s Top Management Strategy. Each was heavily annotated with Don’s margin notes.

Chief among those books, dog-eared and extensively underlined, was Built to Last, Jim Collins and Jerry I. Porras’ account of their six‐year‐long study of 18 major companies that shared, among their distinguishing characteristics, both success and longevity. Don called it the “Schneider Bible.” It was effectively a blueprint for durable corporations, packed with examples of how those businesses stayed vibrant after so many years.

Durability was, arguably, Don Schneider’s most fervent hope for Schneider. Hardly a day passed when he didn’t refer to Built to Last, in which he found inspiration, over and over, as he plotted the future of a great American company which, he knew full well, would long outlast him.

Schneider is built to last, thanks in part to the books in Don Schneider’s library, the blueprint they painted and Don’s relentless passion to implement what he read.

If you’re looking for a great book to add to your library, buy “Leap of Faith”: The Story of Schneider today.

Discover the ins and outs of what makes the Big Orange such a unique place to work.

What books have had the biggest impact on you?

The Schneider Foundation and Schneider associates gave back big time in 2019. Here are six...

2019's Featured Female Truck Drivers is a group of seven intermodal drivers who are based out of...

How to be a good mentor: 5 ways to make an impact

Committing to advise someone in the workplace can be scary. Set yourself and your mentee up for...