Louisiana Flood Relief: Schneider Associates Help Flood Victims, How You Can Too 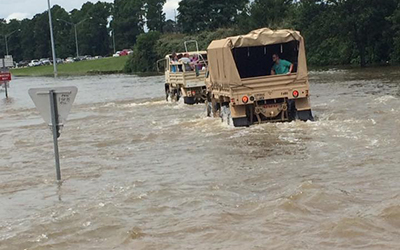 According to the American Red Cross, Louisiana flooding is the country’s worst natural disaster since Hurricane Sandy in 2012. Schneider associates are among those affected, but also among those who are stepping up to the plate to help flood victims. Will you join in the Louisiana flood relief efforts?

Schneider Bulk Safety Director Steve Torres, an Army Reservist, had the water stop several feet from his front door, but he and his wife have hosted a family from across the street and their pets, and helped several other neighbors remove debris, gut drywall and save personal items. As an Army Reservist, he is also involved in mobilizing emergency response, including providing support of incoming federal aid.

“The blessing of having a dry home was multiplied by giving my wife and I the ability to take in a less fortunate family. … The story is replicated thousands of times across my devastated part of the state,”Torres said.

Schneider driver Michael Joyner, retired military, was stranded for several days in Baton Rouge, but he seized the opportunity to help the National Guard and local rescue teams during the evacuation, including evacuating the hospital and helping people get from their houses to rescue boats to safe shelter.

“I just did what I could do to help. I’ve always seen it on TV, but never been right in the middle of it,” Joyner said.

How you can help flood victims and support Louisiana flood relief efforts:

We’ve learned that about 20 Schneider associates have been directly and severely impacted by the Louisiana flooding, including one driver associate whose home was destroyed. Personal safety is paramount, and we’re grateful that all Schneider associates and their families are safe; however, this kind of destruction is unimaginable, and it drives many of us to ask, “What can I do to help?”

The best way to help: Support the Red Cross in any way you can.

The Red Cross anticipates sending 1,500 volunteers from across the nation to Louisiana by the end of the week, and the Schneider Foundation has donated $25,000 to pay for 15 Wisconsin Red Cross volunteers to be deployed to the area.

Schneider is also sponsoring several internal efforts, including a “Casual for a Special Cause” opportunity for Green Bay, WI (our corporate headquarters), associates to wear casual for two weeks for a donation of $10 (or more!). Of course it’s about the cause, not the clothes. The Schneider Foundation will match all funds raised and 100 percent of the combined total will be provided to affected associates. Donations are also being accepted from all locations, which will also be matched 100 percent by the Schneider Foundation.

“I want to thank all of my fellow associates at Schneider for their support of my regional friends, neighbors and associates. In the 26 years I’ve been with the company, this is just one of many times I’ve witnessed the generosity of so many Orange Hearts reach across North American to those in need,” Torres said.

Find out how you and Schneider together can give back to those in need.

Have you witnessed any acts of heroism to help flood victims and Louisiana flood relief efforts? Any questions about how you can help? Comment below.

Trucking company reviews: What you need to know

Reviews matter, but not all trucking company reviews are created equal. Here is what you should...

Truck drivers are essential workers. Be inspired by these stories of heroes at work, and see how...

A competitive pay and benefits package is just the start. Check out these truck driver rewards and...
Job Alerts