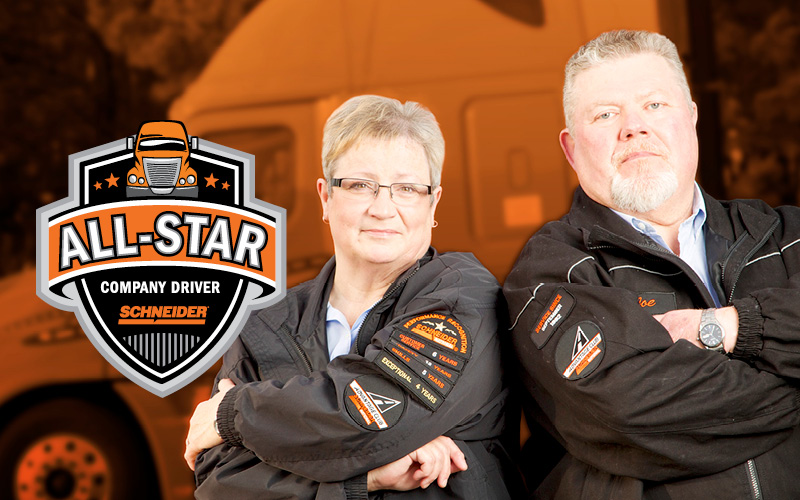 After 13 years of being a team driver at Schneider with her husband Joe Nader, one-million-mile driver Sharon Nader hung up her semi-truck keys in January 2019.

“I already miss having a new challenge every day,” Sharon said. “I miss learning about the local restaurants in different places and getting to be a tourist for a day. It was always about finding fun in the job.”

How team driving worked for the Naders

The Naders felt the keys to their success as a team, both personally and professionally, was being good friends and having open communication. When asked about any pet peeves experienced while on the road together, Joe wisely stated he couldn’t think of any. Sharon confessed Joe was very patient and she put him through the ringer.

The Naders worked together to play off each other’s strengths.

“We did like to have fun and joke around, but in all seriousness, we also always had each other as a support system when we were on the road,” Sharon said. “Team driving was a perfect fit for us – we always got the miles we needed but also benefited from the home time.”

How the Naders got into truck driving

Prior to starting his career in trucking, Joe was a personnel sergeant in the Air Force during Vietnam. Joe became part of the Schneider family in 1992, and in addition to team driving, was a training engineer for 12 years.

“Trucking has always fascinated me, and I was lucky to get an opportunity at the time during a bad economy,” Joe said.

After several years of working at Schneider, the Naders’ family members joked that they should go on the road together. Joe teased Sharon that she could not handle it. Sharon’s response? “Watch me.”

What started out as a challenge for Sharon turned into a life-changing career.

“I wasn’t sure that I was going to last, but I could not imagine doing any other job,” Sharon said. “I constantly pushed myself and learned and saw something different every day.”

What’s next for the Naders? 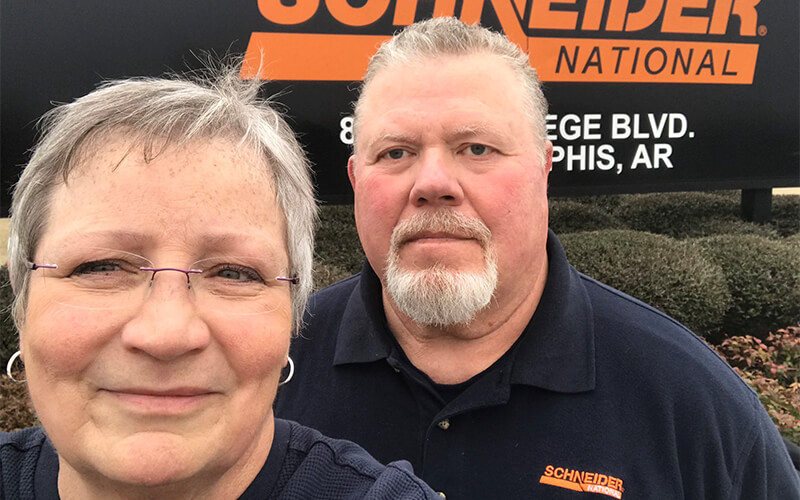 Although Sharon hasn’t been retired for long, she said she is already getting accustomed to life off the road.

“When you’re on the road for 13 years, a lot of stuff back home gets away from you,” Sharon said. “I am enjoying being home, but I’ve been busy getting things back in order.”

As for Joe, he is still racking up the miles, with hopes to make it to three-million before he decides to join his wife in retirement. Lately, Joe has been acting as more of a mentor figure for younger drivers by teaching them about the life of being a team driver.

Joe hopes to find a more permanent partner soon, but confessed he already misses having his wife with him 24/7.

“It’s hard not having that ‘family status’ in the truck anymore,” Joe said. “We were always looking out for each other. I’ve been a team driver for a long time and I’m used to having someone else in the truck with me.”

Sharon said she looks forward to being able to enjoy life at a slower pace now, but will never forget the people she met through truck driving, including her Schneider family.

“I already miss the views from the truck,” Sharon said. “But, I really miss the other people, the other truck drivers who I’ve lost contact with. And, I miss being out with my husband.”

Thank you, Sharon, for your 13 years of service. Your Schneider family appreciates your dedication, and we wish you the best of luck in your retirement!

Check out the different driving options we have available and reasons why professional drivers choose Schneider.

Since joining Schneider in 1978, BB has been able to chase his dreams of seeing the world and...
Job Alerts