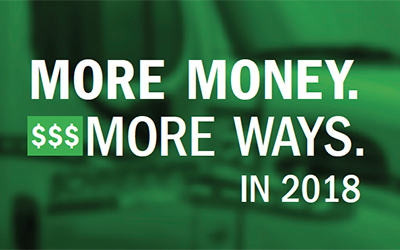 Schneider’s truck driver pay packages are designed to attract and retain the best drivers in the industry, and we’re excited to announce significant improvements that reward top-performing drivers even more in 2018.

In the new Performance Pay Program, drivers’ incentive — now up to $.04 per mile paid out weekly — will be based on safety (no preventable accidents) and three other simple metrics:

While these metrics apply to most drivers, some metrics vary based on unique work configurations.

In the new Performance Pay Program, drivers can earn up to five total points across metrics. The prerequisite to receive performance pay is to avoid any preventable accidents. After that, you simply need to earn a minimum of three out of five points to participate.

You will receive this weekly performance payout for three consecutive months, based on prior quarter performance. At the end of each quarter, your points will be recalculated and your new score will apply to your mileage rate the following quarter.

Did you know? We recently asked Van Truckload drivers: “In regards to pay, what is most important to you?” The top two answers: Earnings per week (as opposed to annual earnings) and consistent paychecks. This new program improves both!

As we transition into this new Performance Pay Program, drivers who work at least 60 days in the first quarter of 2018 (January through March) can get both a lump sum quarterly bonus paid out in April (based on previous metrics) AND the above cents-per-mile incentive paid out weekly May-July.

There may still be time to apply to work long enough in first quarter for a double payout potential!

Under the new pay program, you will get an automatic $.01 per mile annual increase each year until reaching the maximum pay rate for your particular driving job. Previous annual increases were tied to performance through the annual review process.

These new upgrades are part of an already complete truck driver pay package at Schneider that also includes:

Learn more about our pay and benefits.

As a Schneider driver, you’ll earn what you deserve and have options for medical, dental, vision, paid-time-off and more.

Do you have any questions about Schneider’s new Performance Pay Program or other components of truck driver pay?

How many cents per mile does Schneider pay?

For many truck drivers, that's the most important driver pay question, but is the best question to...