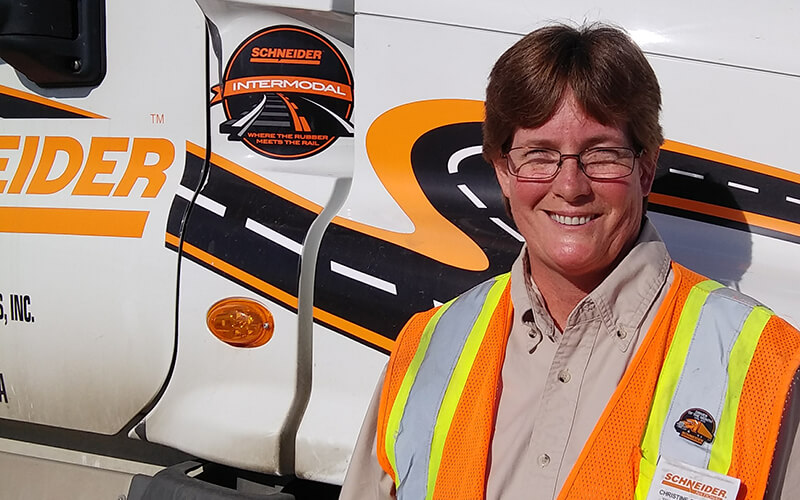 Christine started the program to provide other female truck drivers with the materials and resources they need to go out into their communities and encourage more women to drive truck.

Currently based out of Schneider’s Haslet, Texas location, Christine started truck driving in 2014 for Van Truckload out of St. Louis.

“When I drove Van Truckload, I would deliver to Walmart,” Christine said. “When I went to the dock and brought my paperwork in, there would be women working at the dock and they would say things like, ‘I didn’t even know a woman could drive truck.’”

With the current shortage of truck drivers, Christine believes recruitment is needed now, more than ever.

“This industry needs more drivers,” Christine said. “It’s a feasible job for women. In general, society sees driving as a man’s job. And, it’s not. It’s for both.”

How the project started

The idea to create the ‘Schneider Intermodal Women’s Outreach Program’ originated from Schneider’s Director of Operations in Haslet, Shannon Barkett, finding out that Christine joined the Women in Trucking organization. He challenged Christine to take what she was learning from the group and do something with it.

“Christine is eager to make a difference,” Shannon said. “She is a go-getter. She’s very easy to talk to. New people might be apprehensive about this industry and she will put them at ease and tell them they can do it.”

Why the project matters

Christine believes the biggest reason why more women aren’t truck drivers is because they don’t know they can be. That’s why she finds it so important for current female drivers to make it known that anyone can drive a truck.

And once more women are aware of truck driving, Christine said things are going to change.

“I think there’s going to be a lot more women driving, being managers, being owner-operators, owners of trucking companies,” Christine said, “Once women realize how many options there are at all levels of the industry, there will be more of them coming in.”

Shannon added how he’s already seen the positive impact of more women joining the trucking industry, and that he can’t wait to see how much bigger that impact is going to get.

Learn more about our commitment to helping women become successful truck drivers and why so many continue to choose Schneider.

Eight female intermodal drivers share their tips for fellow women truck drivers on how to be...

Four of Schneider's one-million-mile women truck drivers share their experiences out on the...

Lisa and Patrice were Army "battle buddies,” and they've stayed together as Schneider Team...
Job Alerts