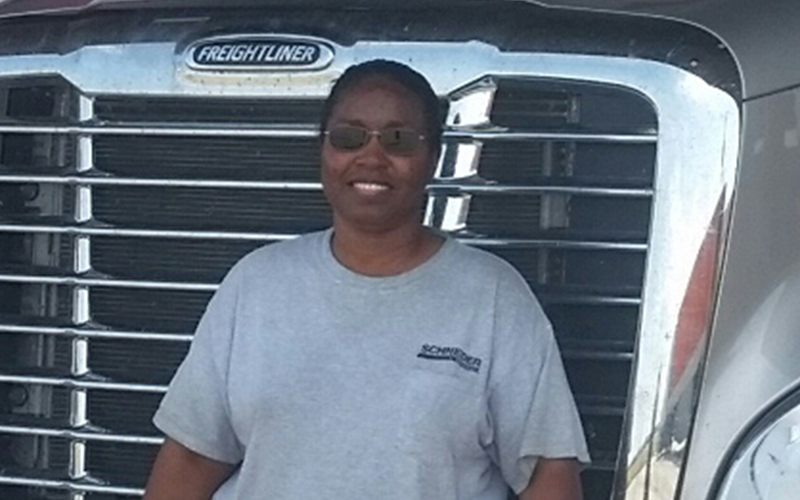 Editor’s note: Schneider is a proud member of the Women In Trucking Association — and we were one of the first corporate members. We regularly publish blog posts related to women in trucking. This post is republished with permission from womenintrucking.org.

Women In Trucking Association (WIT) has announced Melissa Allen as its April Member of the Month. Melissa is a professional driver for Schneider.

Melissa was raised in the infamous west end of Louisville, KY. She moved away as soon as she could and began to have a positive impact on the world around her. After spending several years in the Army Reserve, Melissa went into active duty and spent a short time overseas where she improved the way information was communicated about casualties.

Upon returning stateside, she continued her education and started her own web design company. Melissa built websites for companies all over the United States for seven years before she got her CDL. Why the drastic career change? She says, “The economy forced me to find a recession-proof career.”

Melissa has been serving her country as an over-the-road truck driver for the past four years. However, driving isn’t the only thing she does. She has recently invented a product to solve a problem in the trucking industry.

Melissa repeatedly became frustrated when the fuel nozzle kept falling out of the tanks during fueling. She asked around and realized other drivers had the same problem. So, she came up with a solution. Melissa invented a fueling brace that holds the nozzle secure in the tank during fueling. She has already made prototypes and began the patent process for a brace that fits the Freightliner Cascadia Evolution. More information about the fueling brace can be found at www.FuelingBrace.com.

Melissa urges women to not only live their lives to the fullest, but also make a positive impact on the world around us.

Want to learn more about female drivers at Schneider?

Schneider is dedicated to growing the number of women in trucking by supporting our drivers every step of the way.

Do you have any questions about being a woman in trucking? Comment below.

As Women In Trucking Association in March 2007, Ellen Voie serves as the nonprofit organization’s President/CEO. Voie was previously the Manager of Retention and Recruiting Programs at Schneider. Voie holds a Class A commercial driver’s license as well as a private pilot’s license and enjoys flying her Cessna Skyhawk when the skies are blue!

The trucking industry seems to have its share of anger. In this blog post, Women in Trucking CEO...

Schneider is a proud member of the Women In Trucking Association. WIT CEO Ellen Voie explains...