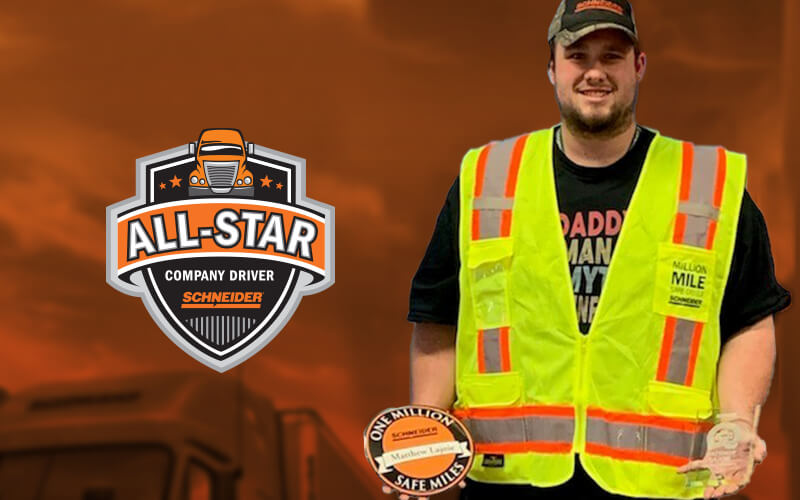 Schneider driver Matt Lajoie just wanted to make it one year. As a 23-year-old, inexperienced driver, all he wanted was to reach his one-year driving anniversary and then do something else.

Not only did now-Dedicated All-Star driver Matt surpass his goal of being a truck driver for one year, but he later reached new goals of five years and then 10 years.

Then, in late 2019, after 12 years of driving, Matt became a one-million-mile driver.

Finding his way to trucking 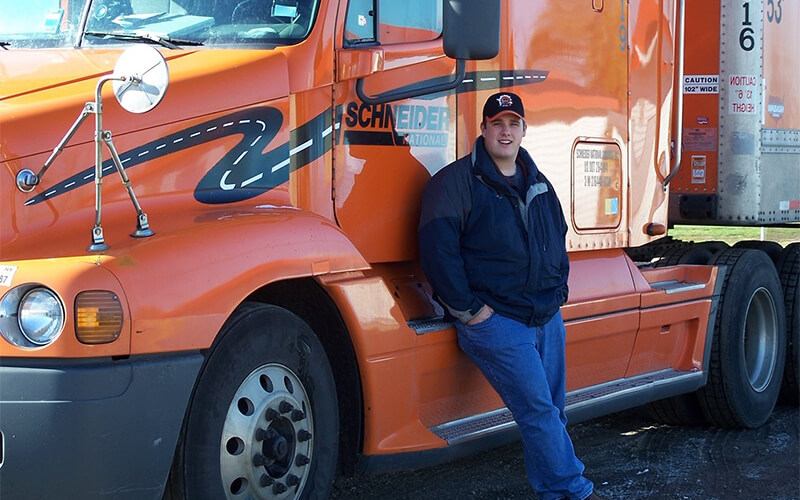 Like many current truck drivers, Matt never envisioned joining the transportation industry. In 2007, the factory Matt was working in shut down, leaving him without a job.

He considered becoming a diesel technician but was encouraged to give truck driving a chance instead.

“I chose Schneider after I graduated from driving school because out of the six recruiters from various carriers, there was only one that showed enough respect to talk with me because of my young age,” Matt said. “And that recruiter was from Schneider.”

Matt drove for Schneider’s Van Truckload division for six-and-a-half years, where he was out two weeks at a time and came home for two days. Although Matt enjoyed crossing into the United States and experiencing new geography, he needed a schedule that provided more home time.

“I started truck driving when my now-wife and I were just dating,” Matt said. “I was gone a lot and she was busy with university, working to become a kindergarten school teacher, so we both really just did our own thing. After our son was born, though, we quickly realized I needed to find a schedule that would work for us as a family.”

Being a Dedicated truck driver

Since 2014, Matt has been on a Dedicated account that allows him to be home almost every morning, so Matt can spend time with his family.

“My family means everything to me,” Matt said. “My son is eight years-old and my daughter is four. My son loves hockey and has been playing goalie ever since he could get onto the ice and into a net. My daughter is also very competitive and very excited to start hockey soon herself.”

When asked what the most challenging part of his job is, Matt explained there isn’t much to complain about, – he enjoys having the freedom to make his own decisions and operating heavy equipment – but driving in winter can be difficult.

In March 2020, Matt was planning on attending Schneider’s annual banquet that celebrates drivers who reached one million miles or more. Due to the COVID-19 pandemic, the ceremony was canceled.

Although Matt was disappointed they were unable to celebrate his achievement in-person, he still received the one-million-mile plaque and decal that he proudly stuck on his Schneider tractor.

“Having that decal on your truck gives you a sense of pride,” Matt said. “And I hope it’s a sign to new drivers that I’m someone they could come to if they have questions or need help.”

As someone whose only goal was to make it one year as a truck driver, Matt sure has exceeded his expectations. And what’s next for him?

“My new goal is to reach 10 consecutive years of safe driving,” Matt said. “And after that … I’ll be working towards reaching two-million miles!”

Looking for a Dedicated driving job?

Consistent miles, home time and schedules are what makes Dedicated truck driving so appealing. Learn how you can get it all by searching for a Dedicated job near you.
Find a job
About the author