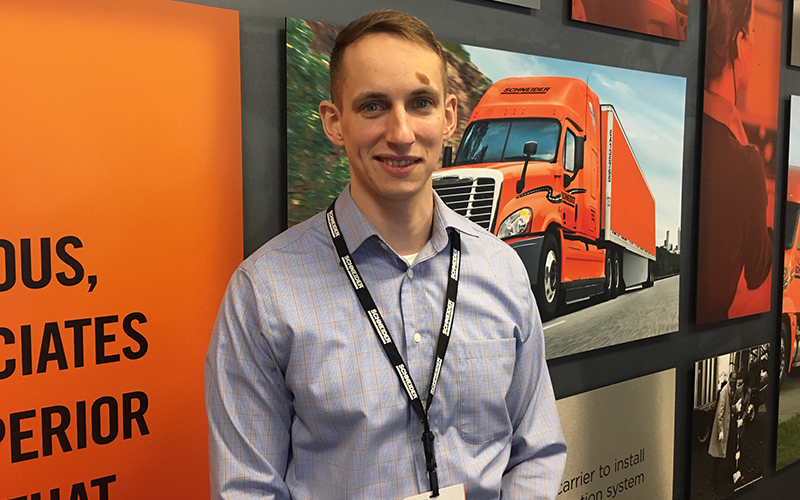 When Schneider goes looking for a new Operations Manager (OM), someone with determination, intelligence, compassion and passion are all on the top of the list of necessary characteristics. As it turns out, Jonathan Bass has all of those traits and then some!

Jonathan assumed the role of OM at our busy Portland location on March 11, and when you hear a bit about his background, you’ll understand why he’s a perfect fit.

Jonathan grew up in Idaho Falls, Idaho, and after high school he attended the Unites States Military Academy in West Point, N.Y. After graduation, Jonathan spent eight and a half years in the U.S. Army, much of the time serving as an armored reconnaissance officer. In that role, he was responsible for leading soldiers and developing strategies to collect information that would be used to improve the Army’s understanding of combat operations.

During his time in the Army, Jonathan was stationed at Fort Carson, Colo. and Fort Riley, Kan. – and he was sent on four deployments to Afghanistan, Qatar, Jordan and central Europe (Poland and Germany).

Because of his career in the Army, Jonathan and his wife had gotten used to moving often, but they now have three children under the age of 5, so they started weighing their options.

“Leaving was not a decision we took lightly; the Army was really good to us, and I loved leading soldiers and non-commissioned officers. But, it was a good time to transition out for my family – and it would give me the opportunity to take everything I had learned about being a leader and apply it in the business world.”

Schneider works with a recruiting firm that specializes in finding jobs for junior military officers who are leaving the service – and that’s who first suggested Jonathan take a look at our company. After doing some research and being impressed by what he found – including that 22 percent of Schneider associates have military experience — Jonathan started the interview process.

“I was really interested in the fact that so many people said they came for an initial job, but then ended up staying for years. Everybody I met had so much tenure with the company – it was amazing. That said something to me.”

‘An emphasis on putting the drivers first’

He added, “One thing that was really important to me was that the culture of the company needed to be the right fit. And what resonated the most with me at Schneider was that there seems to be this inverted hierarchy – there’s really an emphasis on putting the drivers first. That echoed of the military to me; I knew that if I put the best interests of my soldiers first, they would succeed and then we would all succeed. I see the same mentality here.”

Jonathan was offered the role and accepted in October, and he followed a unique training schedule at Schneider’s Green Bay, Wis., headquarters, before moving to Portland in March.

He spent a week embedded in a variety of areas across the enterprise:

In addition, he attended the full DBL (Driver Business Leader) training, and has spent ample time at the Green Bay driver training center watching how Ryan Kimps’ team operates and shadowing Shoua Lee to get fully acclimated to Schneider and the intricacies of the transportation industry.

“From what I’ve observed so far, the driver-focused approach is genuine – it’s not just lip service. And, it seems like people are never satisfied with the status quo; everyone is really focused, but they’re always looking forward to what’s next. I really like that. Also, I’m really impressed by the amount of data used to feed the decision making.”

Moving to Portland gets Jonathan and his family closer to extended family in Idaho, and it gets them closer to the mountains. In their spare time, the entire Bass clan loves to go camping, hiking and just being in the outdoors. They’re even hoping to get the kids on skis soon!

“For me, making personal connections is the most important thing, so I’m looking forward to getting to know the DBLs and drivers in Portland – and putting some faces with the names. I know I’m joining a strong team with a great reputation, so I am really excited to get started."

Looking to make your own career move?

Do you have any questions about Schneider’s leadership training process, career opportunities or our Portland operations? Comment below.

It's one thing to read about a company before applying to work there, but nothing beats seeing what...

Every company claims to be a military friendly employer, but what’s the proof? Schneider values...
Job Alerts