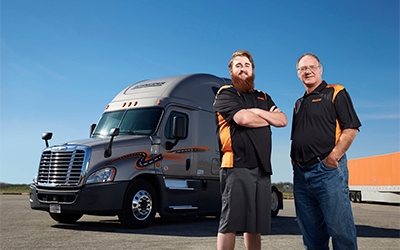 There are many great benefits to being a Schneider Team driver, including higher pay, steady freight and newer equipment. But one of the greatest perks is being out on the road every day with someone you enjoy spending time with. Sometimes that’s a good friend, but other times that means family.

As family, the bond between a father and his son is pretty hard to beat. Whether cut from the same cloth or when junior breaks the mold, it’s inspiring to see a father and son driving team working together out there on the road.

A million miles with Dad?

Schneider has its own All-Star father-son driving Team, Rick and Ricky. Father Rick had 15 years as an Over-the-Road driver, Team driver and training engineer with the Big Orange under his belt when his son, Ricky, asked about joining the family legacy. This team of more than two years spends each day in the cab of an 18-wheeler hauling goods across the country and back again.

That might seem like close quarters for some family members, but these guys exhibit true teamwork, using their different points of view to become better drivers. In fact, all this time on the road has brought them closer than ever. Ricky couldn't imagine driving with anyone but his dad, and Rick enjoys passing his years of learning on to his son.

“I would love to get a million miles out here with my dad before he hangs up his keys,”
said Ricky.

Rick and Ricky, our newest All-Star Team drivers, work together every day to help one another reach their career and life goals.

Any Team driving configuration can work

Fathers and sons certainly make great Team truck drivers, but Team driving can work for anyone who enjoys camaraderie on the road. Spouses, siblings and close friends make up many Schneider Teams, but Schneider even offers a Team Matching Program to connect drivers with similar preferences.

Want to know even more about what Team driving is really like? Get some firsthand insight from our five other All-Star teams.

Earn the biggest money, receive the most miles, use the newest equipment, drive with a friend or family member… the reasons to drive team are plentiful. Learn more about what it means to drive team.
Team truck driving
About the author 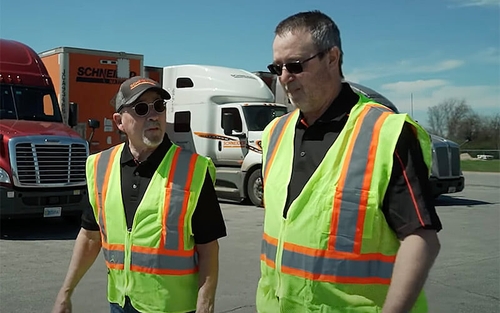