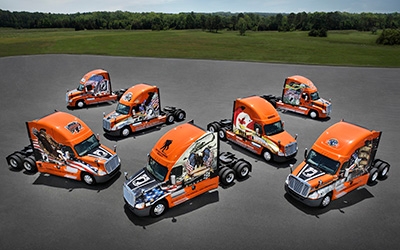 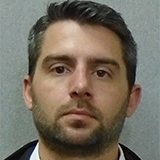 Nine times in the last nine years, Freightliner has selected Schneider to receive its Ride of Pride, a series of trucks designed to be rolling tributes to members of the United States military – past and present. Through the years, they’ve created military-themed tractors showcasing historical images representing all U.S. conflicts since World War II as a memorial to honor all those who have and are serving.

The Ride of Pride program, which originated in 2001 when Ed Keeter, formerly a shift manager and U.S. veteran at Freightliner’s manufacturing plant in Cleveland, NC, proposed the project as a way to honor military veterans. After the first year’s overwhelming success, Freightliner began awarding a military-themed Ride of Pride truck each year to a trucking company.

Because of Schneider’s ongoing commitment to the military, Freightliner has awarded a record nine Ride of Pride trucks to our fleet, consisting of seven — soon to be eight! — U.S. trucks and two Canadian trucks.

2007 – The Ride of Pride VI is a Freightliner Cascadia®, a truck model launched in May 2007. The design features images of a bald eagle, an American flag, a prisoners of war/missing in action (POW/MIA) logo and military campaign ribbons from World War I to the Global War on Terror. This truck has been retired and is no longer in the fleet.

2008 – The 2008 Ride of Pride truck is a one-of-a-kind Freightliner Cascadia®, fully customized with symbols of the United States and the U.S. armed forces decaled on the orange Schneider cab. This truck has been retired and is no longer in the fleet.

2011 – As the United States marked the tenth anniversary of 9/11, Schneider was deeply honored to be selected as the recipient of a Ride of Pride truck. The one-of-a-kind Freightliner Cascadia® is completely customized with symbols of America and the armed forces decaled on the orange Schneider cab. This tractor is designed to show support for active duty personnel, retirees and families who have lost someone in service to the country, as well as for prisoners of war and those still missing in action. The design features images of a bald eagle, an American flag, a POW/MIA logo and the words “Ensuring They Are Not Forgotten.”

The addition of the 2011 U.S. Ride of Pride to our fleet motivated Schneider’s Canadian associates to work for a Ride of Pride that salutes Canada’s Armed Forces. With Freightliner's help, the first-ever Canadian Ride of Pride was born. The one-of-a-kind Freightliner Cascadia® is fully customized with symbols of Canada’s armed forces decaled on the orange Schneider cab. It was designed to show support for active duty personnel, retirees and families who have lost someone in service to the country. The words “Lest We Forget” and “We Support Our Troops” are written in English and French respectively, recognizing the two official languages of Canada. Additionally, the design features poppies, which are the official symbol to commemorate military personnel who have died in war.

2012 – The 2012 Ride of Pride is the 10th Freightliner Cascadia® tractor. The truck is decaled with designs that honor veterans, POW/MIA and other service members of the U.S. military – past and present. With the American flag as a backdrop, a large bald eagle looks menacingly from the tractor’s side; the words “Home of the Free, Because of the Brave” written large around it. More graphics adorn the hood and the airfoil over the cab. The POW/MIA flag symbol is prominent, as is the Wounded Warrior logo on the side fairing. The words “honoring all who have served” are displayed on the side fairing as well.

2013 – The 2013 Schneider Ride of Pride truck, a Freightliner Cascadia®, has a fully customized patriotic decal scheme, including the American flag, the bald eagle, military camouflage, the POW/MIA logo and the words “Those who serve deserve honor, respect, thanks” prominently displayed on the orange Schneider cab.

2014 – The 2014 Schneider Ride of Pride truck, a Freightliner Cascadia®, is decaled with historical images representing all U.S. conflicts since World War II. It also showcases Arlington National Cemetery and the digital camouflage military uniform. This Ride of Pride was the first one in Schneider’s fleet to include logo decals of the Guard and Reserve segments of each branch alongside the logos for the active branches.

2015 – The 2015 U.S. Ride of Pride truck, a Freightliner Cascadia®, showcases black and white imagery of each military branch from World Wars I and II, Korea and Vietnam, as well as decals of the logos of the departments of the U.S. Armed Forces. The background features the American flag and a bald eagle. The doors on each side read, “Honoring all who have served”; and the hood honors POWs and those missing in action.

The 2015 Canadian Ride of Pride truck, a Freightliner Cascadia®, is decaled with imagery from the Canadian War Memorial in Ottawa, Ontario, as well as 10 gravestones from Flanders Fields in France, representing the Canadian military’s first battle independent of the British Commonwealth. The Canadian flag and red poppies frame each side of the truck, along with the sayings “Lest We Forget,” and “Appuyons nos troupes” (French for “Support our troops”). 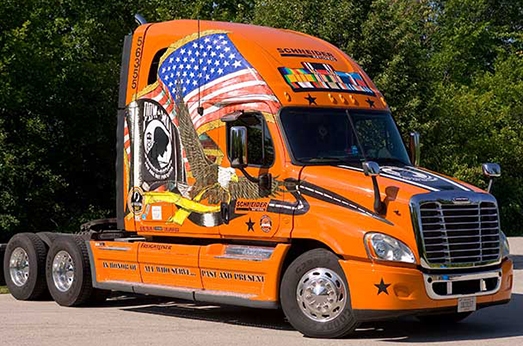 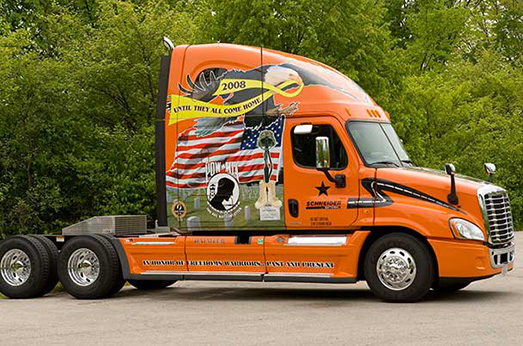 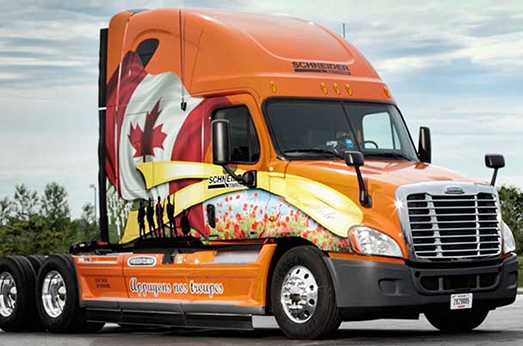 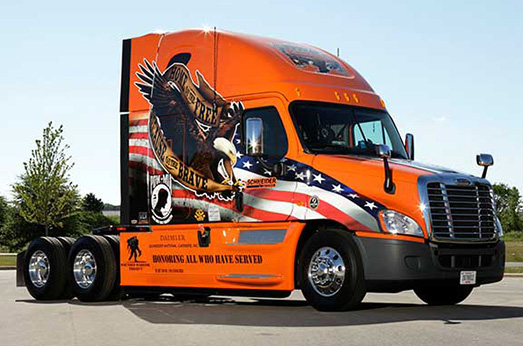 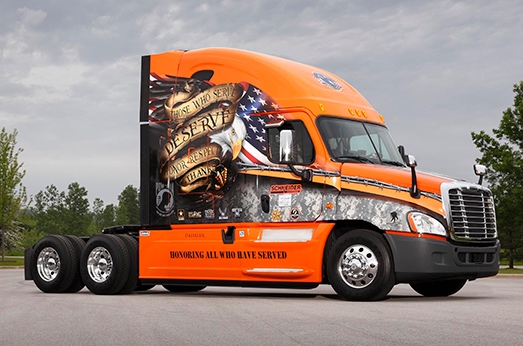 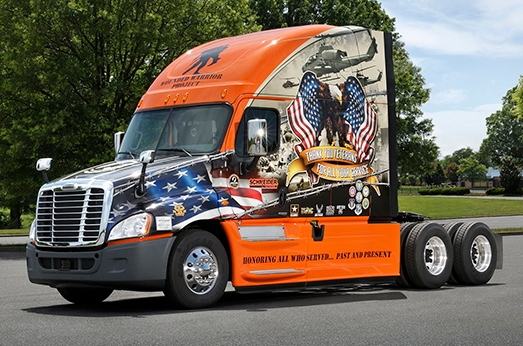 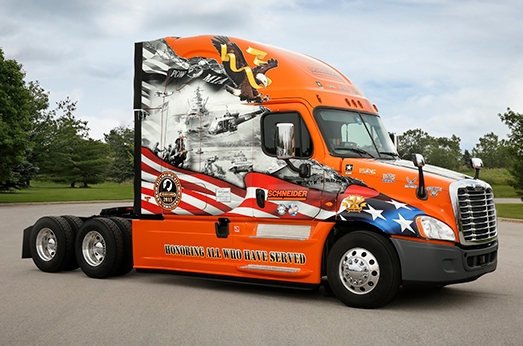 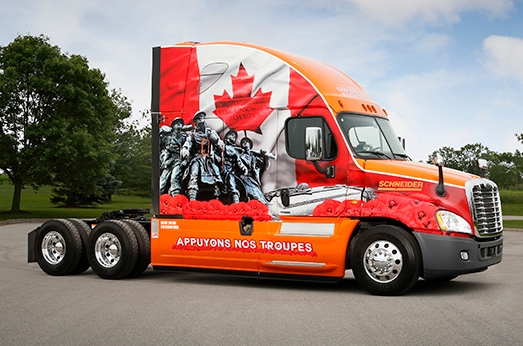 Schneider has once again been selected to receive a Ride of Pride truck in 2016. Stay tuned to see what decals are showcased on this year’s edition. Here’s a video compilation that Freightliner put together of seven of the Ride of Pride trucks — along with a sneak peak at the 2016 Ride of Pride:

For many military veterans, once their service ends and their civilian life beings, the two worlds don’t often intersect. However, for the truck drivers selected to commandeer the patriotically themed trucks at Schneider, their military and civilian careers are both honored daily.

About 27 percent of Schneider drivers are past or present veterans and we’re proud to be the top military friendly employer in the industry. To learn more about what it takes to get in the driver’s seat and be part of a company that sincerely supports the military, check out these steps to become a truck driver.

Schneider is a nationally recognized military friendly employer, and you’ll fit right in here. Fill out our Military Pre-Qualification Profile and get a head start toward a driving career.
Pre-qualification profile
About the author

Matthew is Schneider’s Military Recruiter. He served as an infantry soldier in the Army National Guard from 1997 to 2001 and worked several different civilian jobs before becoming a truck driver with Schneider in 2007. He drove in a variety of positions before advancing to a local instructor role, and then into Recruiting. Now he helps other veterans find fulfilling careers with Schneider. 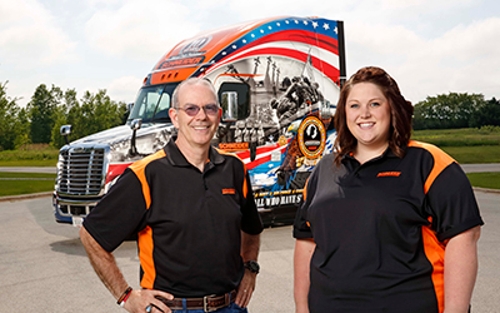