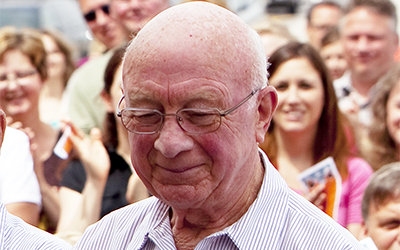 Our hearts are heavy this week as we remember long-time former Schneider associate Julius Borley. Julius passed away on Monday, October 5 in Green Bay, one day after his 91st birthday.

Hired on September 20, 1948, Julius holds a special place in Schneider history. He was one of two drivers in 1958 who hauled Schneider’s first Interstate load to Cheboygan, MI for Procter & Gamble. Julius humbly referred to that run as “just another load” even though it was so much more: It opened the door for Schneider to haul freight across state lines and allowed the company to grow in ways previously impossible.

Julius had the distinction of working for both Al and Don Schneider. Al hired him in 1948 and, history has it that, Julius was one of two drivers who taught Don how to drive a truck back in the 1950s.

When he hung up his keys after his driving career, he became a tour guide for the organization, sharing his wisdom and with visitors to the Corporate Business Center. He retired in 2013 as the company’s longest-tenured associate, logging a record-setting 65 years with the Big Orange. His affinity for our organization is noteworthy, including the fact that his Schneider family was among the first to be notified of his passing.

Through the years, Julius openly shared his thoughts about the company and the industry he loved:

As the company celebrated its 75th anniversary in 2010:

About his wife, Verna:

“When I wasn’t gone, I was home sleeping. She was the backbone of the family.”

We dug through the archives this week and found some other pearls of wisdom that Julius shared with us in 2008. Organizations endure and thrive for 80 years because of their people. Julius was one of those people. Please join us in reflecting on his service to our organization and a life well lived.

How could you make an impact at Schneider?

Interested in being a truck driver for a company that will show its appreciation through competitive pay, outstanding benefits and flexible home-time? Apply now.

Truck drivers need to get creative to make the most of the available space. Use these semi-truck...

What do current Over-the-Road truck drivers consider to be their must-have items on the road? This...
Job Alerts