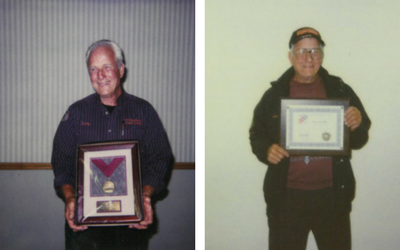 Sonny was the first driver in company history to achieve 4 million (top left photo receiving his award) — and then 5 million — safe miles, the latter being a feat accomplished only by current Schneider driver Bob Wyatt.

While his combination of tenure and miles are unparalleled, Sonny was perhaps best known around the company for his adopted persona as “Schneider Man.” It was hard to miss his orange shirt and leggings, the black cape and curly wig that Sonny frequently wore at Schneider driver get-togethers, like Christmas parties and summer picnics. He also appeared in a 2000 winter safety video — “Schneider Man Beats Mr. Freeze.” 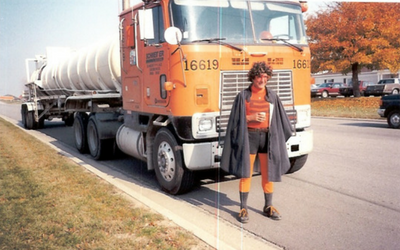 In addition to his incredible career with Schneider, Sonny was also a semi-professional baseball umpire, and he loved to downhill ski.

He is survived by a daughter Jenny, a son Daniel (pictured with Sonny), a grandson Alex, eight sisters, two brothers, other relatives and friends, and many fellow Schneider drivers and associates who still remember Sonny and his legacy to this day. Read his full obituary.

“Schneider Man” was a hero to many, and it’s with great sadness to hear about his passing. We’re proud to have had him on the Schneider team and reflect on his incredible contributions. 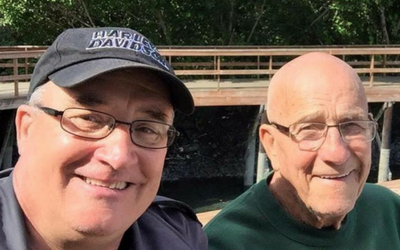 You could be the next ‘Schneider Man.’

Interested in being a truck driver for a company that will show its appreciation through competitive pay, outstanding benefits and flexible home-time? Apply today.

If you knew Sonny “Schneider Man” Wagner, what do you remember about him? If you didn’t get a chance to know him, comment with a testimony about a mentor driver you had or a veteran driver you learned from.

Nothing could be a more fitting tribute than to have a driver ring in Schneider's IPO, and no...

Julius Borley, who logged a record-setting 65 years as a Schneider associate, passed away this...