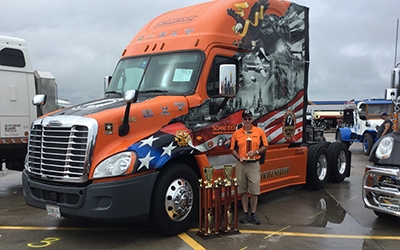 He was right — but a second first-place trophy was unexpected.

Hull and his truck, designed by Freightliner and named “Patriot,” won first-place prizes at the Jamboree for best company truck and best custom graphics. Altogether, 80 trucks competed at Iowa 80 — the World’s Largest Truckstop.

“The custom graphics award explains itself. All eight judges were mesmerized and overcome by [the powerful imagery on the truck],” Hull said. “A couple of the judges were older veterans, and they were actually teary-eyed. I knew we had it.”

But that award came later. The very first award announced during the contest was for best company truck. Hull was casually talking with a Schneider recruiter when he suddenly heard, “All the way from Green Bay, Wisconsin, Patriot and driver Jay Hull” over the PA system.

“The award for best overall company truck, that award I was really proud of,” said Hull, who had spent hours cleaning, shining and waxing his chromed-out Freightliner Cascadia.

Awards are a nice bonus for the Ride of Pride trucks, but the biggest reward is hearing what the trucks mean to veterans, and hearing their stories.

Hull and the 2015 Ride of Pride truck will continue to travel to various military events and truck shows throughout the country. Schneider now has nine Ride of Pride tractors in the fleet.

We are a top military friendly employer

Learn more about our Military Program and what makes it stand out amongst other employers.
Learn about our military program
About the author