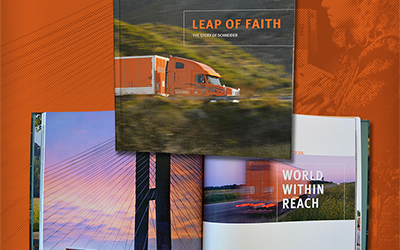 Each of us has a story to tell. Some people share openly, while others are more private, keeping the details of the journey they’ve embarked upon to themselves.

When it comes to telling their story, companies, I’ve found, are a lot like people. For Schneider, the story goes all the way back to 1935 when one man with one truck and one dream decided to harness his entrepreneurial spirit and start a trucking company.

I first had the chance to dig into this story back in 2010 as we prepared to celebrate the company’s 75th anniversary. The more we dug, the more we realized what a rich and fascinating story we had, right before us. What an orange goldmine! We were quick to learn, however, that as wonderful as the story was, little had been done over the years to archive information or document company milestones.

The reason? Once the company got rolling during the midst of the Great Depression, founder Al Schneider and later, his son, Don, never looked back — literally. “We prefer to look at what’s down the road, not what’s behind us,” they would often say.

While that marching-forward mentality has bode well for Schneider over the years, there was a nagging sense that time was marching on and our history was slipping away, similar to how many lament the loss of our WWII heroes.

Now was the time to get after it. On the heels of the 75th, we took our own leap and launched a three-year process that resulted in the company’s first-ever company history book. “Leap of Faith:” The Story of Schneider debuted in early 2015. It tells the story of eight decades of rolling forward and not looking back, from selling the family car to buy the first truck, to surviving and thriving both deregulation and the move to union free, and weathering the Depression, the Great Recession and about a dozen other economic cycles and fuel crises.

As the book came together, I was struck by how many associates have been actively involved in taking those leaps with the company. Some were small. Others, like being the first to invest in in-cab satellite communications, were monumental and changed an entire industry. And I was impressed by the longevity of associates who have endured the company’s highs and lows and through all the change are still energized to call Schneider home.

It was an honor to be up close and personal as this special legacy came together. I’m especially proud that the book does not read like a boring history textbook. It is filled with stories, which is indicative of the kind of company and culture we have cultivated during our first 80 years. After all, every company has a story to tell.

Buy the book today. All proceeds from the sale of “Leap of Faith” are being donated to charity.

Could Schneider be the next chapter in your book?

Search our job openings and make your next career change with Schneider.

What Schneider leap of faith were you a part of?

Storytelling is a big part of the work Janet does each day at Schneider. In her role as Public Relations Manager, she is responsible for finding and developing stories that speak to current and future Schneider associates and customers. Janet has been with the company for 11 years. Her storytelling role includes working with all types of news media and internal subject matter experts to share industry, technology, safety, business and human interest stories related to The Big Orange.

Listening is a big part of improving the driver experience. Here are several tangible examples of...

Schneider associates love to give back. One of the many examples is the Schneider Women's Network's...

Schneider certified as a 2019 Great Place to Work

Schneider is proud to have been certified as a 2019 Green Place to Work.