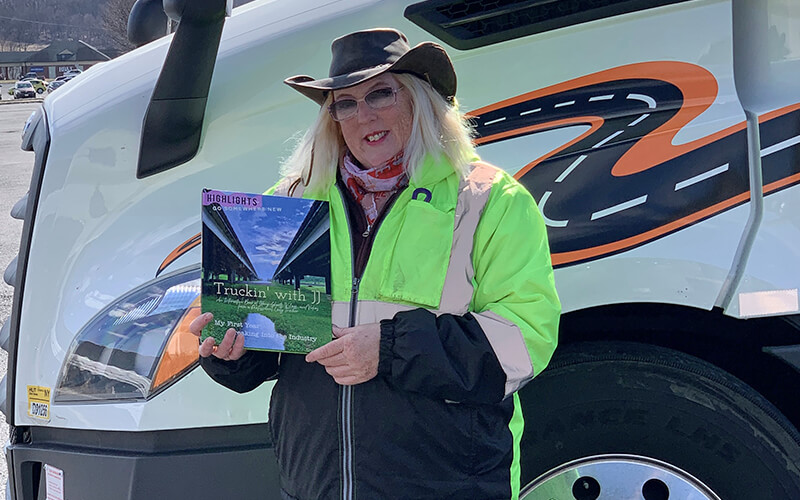 It’s not uncommon for truck drivers to have other careers prior to joining the transportation industry. Many Schneider drivers came from prior roles in factories, warehouses, the military, etc.

Over-the-Road truck driver, Jo Lynn Kelley (who goes by JJ Artsy), also had a different career prior to joining Schneider. Before getting her CDL in March of 2020, JJ was a full-time artist.

JJ didn’t give up her passion for art since joining the industry. On the contrary, truck driving has become just another outlet for her to channel her creativity.

JJ even wrote and published a book during the first 12 months at her new job, titled, “Truckin’ with JJ – My first year: Breaking into the industry.” 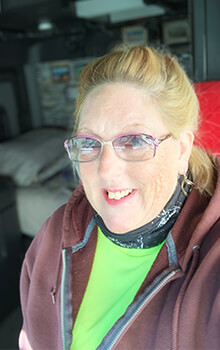 Joining the truck driving industry after being a full-time artist

JJ has been an artist ever since she graduated from high school. She owned a photography studio back in the 90s and was able to pursue art as a side gig while working in financial analysis and project accounting about 15 years ago.

However, in the year leading up to becoming a truck driver, JJ was doing art full-time. Her projects consisted mainly of photography, painting, blogging and drone cinema.

JJ is a firm believer in “if you’re interested enough to be interested, then it’s definitely something you should explore,” so when the idea of becoming a truck driver came to mind, it was something she just had to look into.

What JJ quickly realized was that, she not only had the right interests to become a truck driver, but she had the personality to make the industry better.

“I love to travel, I love adventure and I love driving and exploring,” JJ said. “I could travel the country and try to polka-dot it with happiness and brightness. And I’m able to do that in short spurts when I meet people. It all made sense why this would be a great career change.”

Finding the right company to drive for

Once she decided to move forward with getting a CDL, the next step was to find the right carrier to work for.

“When I was researching companies to apply to, one of the top criteria I was searching for was safety,” JJ said. “As I was narrowing down my list, Schneider was at the top regarding safety. The other thing I found as I continued exploring Schneider, was the versatility of the company. By that I mean, we do intermodal, we do tanker, there’s teaming, there’s jet setting. And then there’s the amenities and all the other things that you can’t quantify in a paycheck but add to the positives of the company.”

And while JJ appreciates the focus on safety and the plethora of driving opportunities, – her goal for the next year is to try out a different line of service – what really keeps her at Schneider is the emphasis on innovation.

“Dispatcher – that is a common title in this industry,” JJ said. “At Schneider, though, they are Driver Team Leaders. I am quirky that way, too. I try to do that little thing to set myself apart, and it’s cool Schneider does that too. I constantly see efforts to improve, like making changes based on driver survey results. They really try to keep doing more, so that’s why I stay.”

Pursuing art while she's out on the road

JJ had learned how to intertwine her passion for being creative while working at an office job, so she knew it could be done when she hit the road as a truck driver.

“For example, where I used to do long blogs on my website, now I do shorter Facebook posts,” JJ said. “They’re kind of like little blogs, but they take 15 minutes instead of three days.”

JJ has also learned how to find ways to get some pretty great photos, despite constantly being on the move. She said she’s the type of person who can’t not take a picture, especially considering all the amazing, photo-worthy landscapes she sees while traveling the country.

“I’m not able to just stop and take photographs, or use my smart phone or DLSR and snap pictures as I’m driving,” JJ said “I’ve had to hone in and adapt all that to dash cameras so I’m hands-free. And I found a way to adapt because photography is a love of mine.” 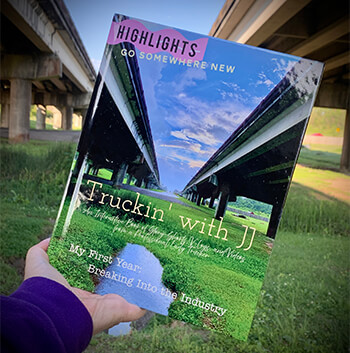 Publishing a book about her experiences

JJ knew she needed to do something with all the pictures she had taken that captured what life on the road was like during her first year of truck driving. She had been wanting to publish a book for a while, and when a longtime friend told her to go for it, JJ made up her mind to do so.

So, in February 2021, she published her first volume of “Truckin’ with JJ.”

“I consider it a coffee table book with some extras,” JJ said. “It has a lot of photography; you can thumb through it and look at all the pictures and get a feel of what my first year in the trucking industry was like. On top of that, it has little blurbs for the people who want to read. And the third element to this book are the QR scan codes. So you can scan a code with your phone and it will take you to one of my blogs.”

With both her first book and her first year of trucking under her belt, JJ is already working on volume two. Instead of focusing on the places she visits, JJ’s second book is all about the people she meets through her job.

“My second book will be very similar to my first, but it’s going to tie in more of the brilliant people I’ve been meeting,” JJ said. “I want to expand outside my personal adventure.”

And like her first book, JJ’s goal for her next one is the same: to inspire those who read it.

“I hope people look at what I’ve done and find something in the book that speaks to them on a personal level in their own life,” JJ said. “I hope they say, ‘Look, this girl did this. Maybe I can do this?’ I hope it inspires people and gives them the confidence to go out and do something.”

Get to know more Schneider drivers.

Meet more of the outstanding truck drivers who make up Schneider’s fleet. Learn about what they’ve accomplished while working in the industry and why they became truck drivers.

Read All-Stars blogs
About the author 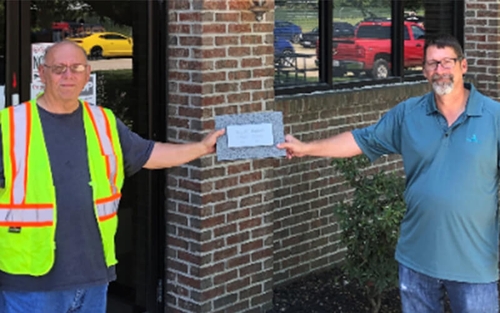