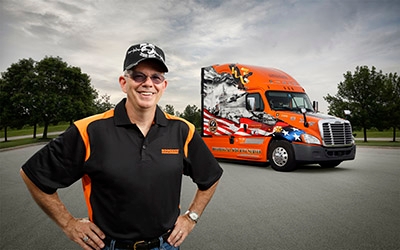 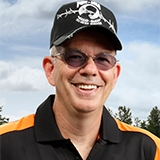 My journey as the 2015 Ride of Pride driver started last year in May as I was selected to pilot the 2015 truck for 12 months. I still remember how excited and shocked I was when I received the phone call telling me that I had been chosen for the new truck. I actually had to pinch myself to make sure I was not in a dream.

The first time I saw Patriot, the name I gave to the truck at the Freightliner plant in Cleveland, N.C., I was truly amazed at how beautiful and patriotic the truck is.

My first event was the Rolling Thunder tribute ride to Washington, D.C., on Memorial Day weekend — that was amazing and very touching to say the least. Patriot is a true rolling tribute anywhere we go.

My second event and one of my favorite ones was the Rolling Thunder event at the United States Military Academy in West Point, N.Y. I knew then that Patriot was going to be a very big hit with the older veterans because of how they would come up to the truck and touch a picture on the side that reminded them of a lost loved one.

Throughout the past year, I have laughed so hard at times that my stomach hurt, and other times I have cried so hard my heart hurt.

Patriot and I have attended four truck shows and placed in all four in different categories — including a double win at the Walcott Truckers Jamboree.

I had the honor to have Gold Star family members ride along with Patriot and me on the weeklong convoy from Maine to Arlington National Cemetery. As the Gold Star Mothers would tell me about the loved one they had lost, they would start at the young age and tell me the life story of their loved one up until the time they were taken from us. The stories were full of both happiness and sadness at the same time. I know in my heart that it helped them to talk about their loss and of how proud they were of their greatest sacrifice to our great nation.

Throughout the year, I worked with some of the best field recruiters in the business as Patriot and I would join Schneider field recruiters and spread the word of the great opportunities that Schneider can offer to drivers of all experience levels. I had a very good time doing the recruiting events and job fairs throughout the country.

I recently had an exciting week because Patriot and I attended a hiring event at Fort Leonard Wood, Mo. — which is where I attended basic training and advanced individual training 34 years ago when I joined the U.S. Army. I had never been back since, so it was awesome to see the post again.

For my next — and last — event, I will join Rolling Thunder coming out of California and escort them from Nebraska to Washington, D.C., for the Memorial Day tribute ride.

My time as the Schneider 2015 Ride of Pride driver has been a highlight of my life that will stay in my heart forever.

I cannot thank Schneider enough for giving me the opportunity to represent them in one of the most honorable ways possible.

As I close, I want to thank everyone that has followed Patriot and I throughout our journeys this past year through the Ride of Pride Facebook page and in person. Again, thank you Schneider for the great privilege I have had this past year and to everyone else. Please be safe and Godspeed.

Do you have military experience?

Schneider is a nationally recognized military friendly employer, and you’ll fit right in here. Fill out our Military Pre-Qualification Profile and get a head start toward a driving career.
Pre-qualification profile
About the author

Jay Hull of Green Bay, Wis., has been a Schneider driver since 2012, including a year as the 2015 Ride of Pride military tribute truck driver. He served in the U.S. Army for 24 years as a driver, completing tours in Iraq hauling fuel tankers. He also acted as a recruiter, career counselor and chemical, nuclear and biological warfare specialist.