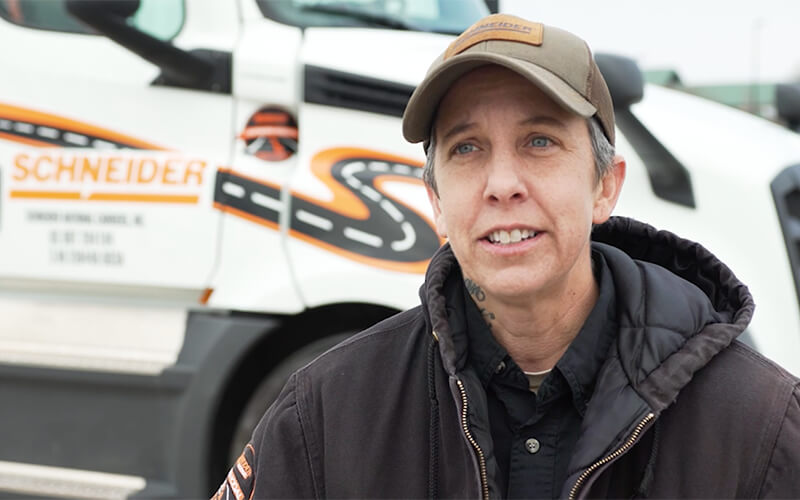 Although they have different backgrounds, are from different walks of life and joined the transportation industry for different reasons, this year’s Featured Female Truck Drivers have at least one thing in common: They all love what they do.

As truck drivers for a combined total of over 30 years, these women have driven countless miles and have hauled thousands of loads for Schneider.

This year’s Featured Female Drivers are based out of Schneider’s Haslet, Texas operating center, which is located about 40 miles northwest of Dallas. They’re all intermodal drivers, meaning they haul freight to and from rail yards, but each has her own home-time configuration.

These women make up about 10 percent of the total Haslet Intermodal fleet.

This year’s Featured Female Drivers agree there has long been a misconception that women can’t become truck drivers. They think it’s time for that to change.

“There are so few women in trucking because they just can't picture themselves doing that kind of job; it's always traditionally been a man's job,” Elizabeth said. “But there's absolutely no reason why a woman can't be a truck driver.

Christine said many women may be hesitant to join the industry because of the demanding work schedule. She believes most people aren’t aware of the different driving styles and home time configurations trucking companies offer today.

Pixie agreed, proving it’s true by sharing her the example of her own life.

“You can still have a normal life and do this job because I've got a boyfriend and grand kids and family, and I see them every weekend,” Pixie said.

The Featured Female Truck Drivers said the support they receive while out on the road has helped them excel in the industry. They said the support comes from more than just other women - that men, too, are there to lend a hand.

“The other drivers out there are excellent,” Robbin said. “I mean, if you get stuck or if you need some help, there’s always someone, male or female, willing to get out their truck and help you.”

Genevieve added her perspective of the larger group these seven women work with.

“I wouldn't call this a sisterhood; I would call it more of a community,” Genevieve said.
“Truckers, in general, look out for each other.”

From the freedom of the open road to facing new challenges each day to meeting new people, Jennifer said there is a lot for a woman to like about being a truck driver.

“It's a great job, the money is good, seeing the country... it's worth it,” Jennifer said.

Trish, a one-million-mile driver who’s been with Schneider for over 10 years, said the hardest part is just getting started. Once a woman becomes a truck driver, her confidence will grow.

“If I can do it, anybody can do it,” Patricia said.

Ready to make a move to Schneider?

New to the industry? A ten-year veteran looking for a change? Schneider has a huge variety of truck driving opportunities so you can find what you’re looking for.