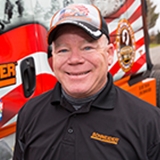 Getting the call about coordinating your next load is nothing new — it’s part of the job as a professional driver. However, I came to find out that not all calls are created equal.

When I received the call about a new load, I was informed that I should keep my calendar open the week of Thanksgiving. Again, nothing too out of the ordinary, but after a brief pause, the other shoe dropped: This load was headed to the White House.

The White House. Take a moment to let that sink in. I wasn’t just making a delivery in Washington, D.C. — I was delivering a load to one of the most prominent and recognizable landmarks in the country.

As if that wasn’t exciting enough, of all the things I could be transporting, I was getting the opportunity to drive the official White House Christmas tree from Whispering Pines Tree Farm in Oconto, Wis., to 1600 Pennsylvania Avenue. Even more notable about this particular balsam fir is that it would be adorned and displayed in the Blue Room, which is dedicated to America’s military members and veterans.

A Christmas tree with such an important final destination deserved to be transported in a truck equally high in caliber. My truck, Patriot, is a rolling tribute to America’s military and one of Schneider’s 10 Ride of Pride trucks, making it a natural pairing with the tree to make the trek out east. As a veteran myself, transporting the tree in Patriot made the opportunity even more symbolic and memorable.

To say I was shocked and honored was an understatement, but I quickly put those feelings aside and immediately started thinking about the logistics required: first, getting the tree off the farm; second, maneuvering the tight streets of Washington, D.C. and the city as a whole; and third, complying with the heightened security requirements for delivering a load to the White House.

Working with my team, we assessed the necessary components for each major part of the move and put an action plan in place. Before I knew it, it was time to move the White House Christmas tree.

Regardless of the truck or load, security is always a top priority when out on the road. I needed to be extra vigilant given that I was driving Patriot as well as the national Christmas tree. Of course, the tree was under lock and key, but during rest breaks I was instructed to water and air out the tree to ensure its health. Opening the trailer and tending to the load added an extra layer of protection and heightened awareness to my mission. Thankfully, the drive out east was safe and uneventful.

When the official delivery day arrived, I had to go through several security steps before being escorted to the White House for the official drop-off. The first was a preliminary inspection, where I was instructed to drive the truck and trailer onto a giant X-ray machine. As the truck was inspected, the security guards talked with me about the truck — and every one of them was taking pictures of it.

Once the truck passed the X-ray machine, I was told to park on the street outside of the White House until further instructions arrived. Meaning I was ordered by White House security personnel to legally block the street and intersection — and it was OK! That is, without a doubt, the first and last time that will ever happen.

At this point I presented my credentials, and an even more intense security check was conducted of the truck — literally everything within the cab was overturned. Finally, I was allowed to back through the gates and up to the White House to deliver the tree. This maneuver took all the skill I had to ensure a smooth operation due to the tight demands of the area. The adrenaline took over and I zeroed in on the task at hand. I delivered the load without a hitch, and, just like that, my mission was complete.

Taking it all in

As I got back on the DC Beltway after the delivery, it all kind of hit me. The planning, driving and drop-off required a lot of preparation and thoughtful execution. Overall, I was just proud. Proud the White House Christmas tree came from Wisconsin. Proud for being entrusted to deliver the load with a strong team guiding me along the way. And proud for a seamless delivery. It’s not every day something like this happens — I’m just glad Schneider and I got to be a part of it.

I was back home by Black Friday, which was the day the tree was presented to Michelle Obama. Even though I wasn’t there, it was fun to know that I played a part in that tree’s story.

As it turns out, the White House Christmas tree didn’t make it to the Blue Room. A tree for that room must meet minimum height and width requirements, and, sadly, the tree fell a little short. Instead, the tree made it to the Garden Room, which also pays tribute to America’s service members, so there’s still a part of Wisconsin — and Schneider pride — represented in the White House this holiday season.

Watch the video above for more about delivering the White House Christmas tree.

We’re proud to hire those who serve.

Fill out our Military Pre-Qualification Profile and you’ll be put in contact with a military recruiter to help you find your fit at Schneider and learn about our benefits.

Fill out a military pre-qualification profile
About the author

Chip Hill is a driver in Schneider’s Dedicated division, and he has been with Schneider for 23 years. An Air Force veteran himself, Chip has been driving the 2015 Ride of Pride truck. He currently resides in Green Bay, Wis. 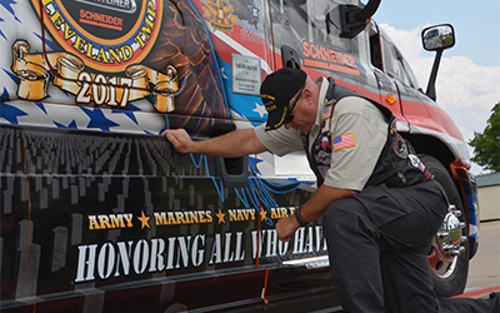