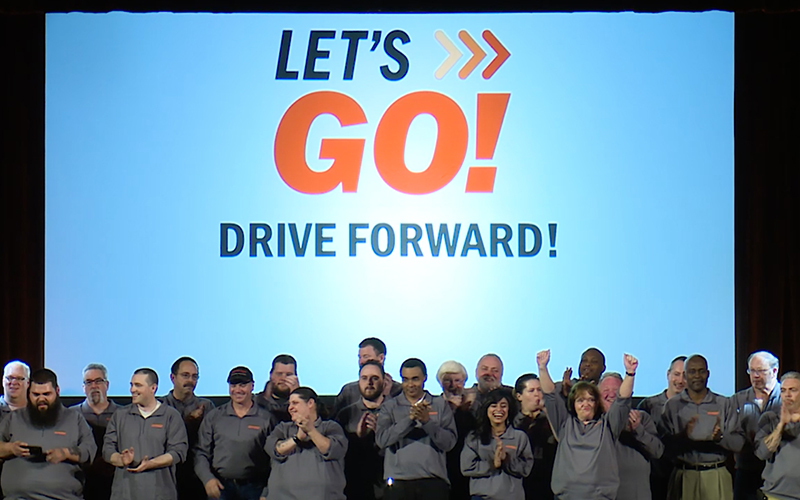 It’s no surprise that our driver and office associates are our most valuable assets. It takes an efficient and devoted team to coordinate and move freight, and that’s exactly what we have. As individuals reach certain milestones — such as years of service or safe miles driven — they’re recognized for their dedication and commitment to safety. In addition to honoring those long-term achievements, we wanted to find a special way to recognize associates in the moment for truly exemplary, above-and-beyond contributions to the business. The result: Value Coins.

Schneider implemented the Value Coin in 2015 as a special way to say thank you to associates for the exceptional work they do. These specialty coins are a way for Schneider leaders to provide immediate, on-the-spot recognition for associates who are living our core values and going above and beyond expectations.

Just like Schneider has deep military ties, so does coin recognition. The first coins can be traced back to World War II and were used to correctly identify U.S. servicemen from enemy imposters. Officers presented unit coins, also known as Challenge Coins, to soldiers for acts that were deemed worthy of recognition but didn’t warrant an official medal.

Over the years, Challenge Coins have evolved and are now used by organizations outside the military, but the tenor of pride they encompass for all who receive them remains the same. Not only do the coins build morale, but they serve as a tangible reminder of the recognition and convey a feeling of membership. 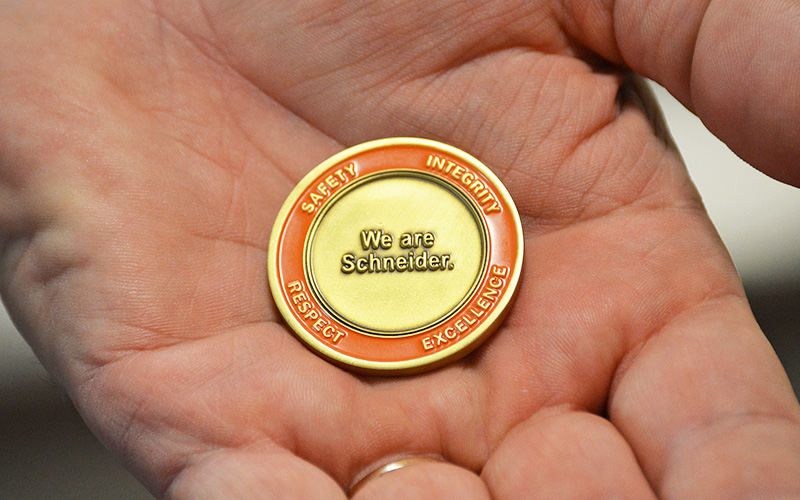 In keeping with the military tradition of coin presentations, Schneider’s Value Coins should be given to the associate in person and with a handshake or another form of one-to-one recognition. If a handshake is used, the coin should be “palmed” and then passed from the right hand of the giver to the right hand of the awardee. The presentation should be discreet, personal and authentic, with the giver thanking their fellow associate for their efforts to live Schneider’s core values. Recognition should be immediate; when a leader sees an associate acting with safety, integrity, respect or excellence, action should be taken. This is a special moment for both parties involved, making it a memory to be treasured.

“I was doing a series of 30 driver interview in Atlanta and Chicago with Jim Herbert from associate relations. We traveled to both locations to talk with drivers who were involved in a pilot program with forward-facing dash cameras, obtaining their feedback on how it was to work with them and listening to their concerns. We were at a point in the program where we were considering expanding it, and we wanted to understand how the broader fleet might react to that expansion.

“At the conclusion of the interview process, Jim gave me one of the recognition coins. I was really surprised. Jim explained that he had been very impressed with how comfortably I’d spoken with all 30 of the drivers, and how I kept focus on our number-one core value of safety, while effectively fielding and responding to the drivers’ concerns. He was also impressed with how technically aware I was with the system that we were discussing, and how well I had prepared for the conversations — even going so far as to bring sample videos to share with drivers who had not yet seen what their dash cameras captured. 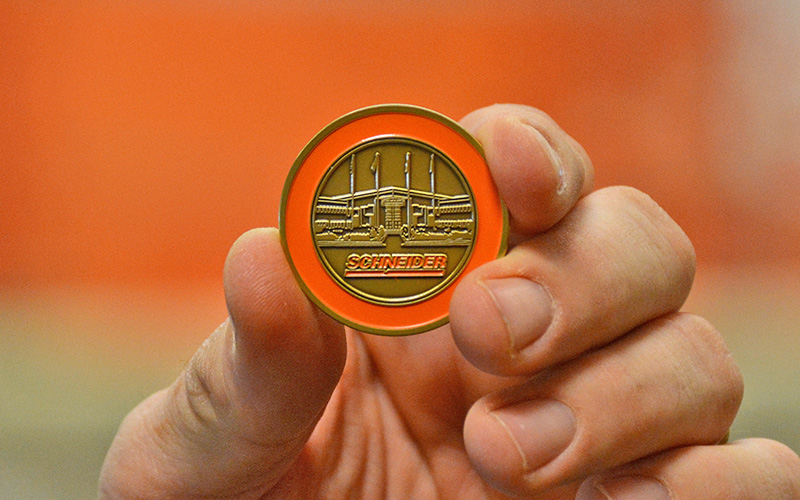 “From my many colleagues who are veterans, I knew how much a Challenge Coin means in the military, so I understood that this was a truly special moment. I felt like I was just doing what we do here at Schneider — trying to do the right thing for the drivers and for the business. It was nice to be recognized for all of that.”

As Dan touched on above, receiving a coin is a stunning moment. Many associates assume they’re just doing their job, which is a testament to the high standards they set for themselves in their day-to-day work.

Of course, Value Coins are just one way we recognize associates. A few others include:

Going above and beyond to show associates’ value.

We know the importance of our associates, and that’s why we ensure they are happy and healthy at work and outside of work by offering a wide variety of benefits.

Have you received a Schneider Value Coin or another form of Schneider recognition? If so, what was your experience like?

Associate Relations Manager Tammy Grunert has been with Schneider since 1999 and oversees associate recognition. Throughout her long career, Tammy has enjoyed the many opportunities she’s had to work with so many driver associates and learn about the transportation industry from them.

When Schneider became publicly traded, we basically took over Wall Street for the day, so a New...

Schneider works hard to recognize associates, and our annual awards across five categories are one...

Schneider respects drivers and rewards them through the Advantage Club, exclusively for company...
Job Alerts